From WikiVet English
(Redirected from Osteoblasts) 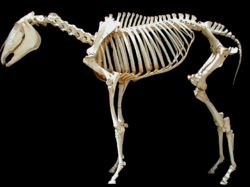 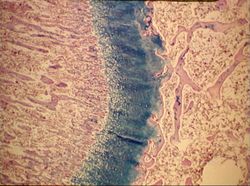 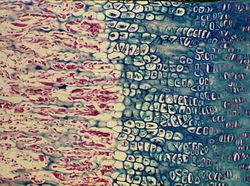 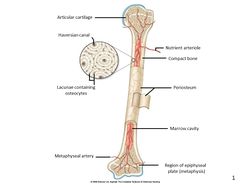 Bone comprises the structure of the skeletal system and provides lever arms for locomotion. Bone also plays important roles in maintaining mineral homeostasis, as well as providing the environment for hematopoesis in marrow.

Short bones - Endochondral ossification continues in the diaphysis, until only the cartilage rim remains.

Long bones - A secondary center of ossification develops in the epiphyses.

The epiphyseal growth plate (EGP, physis) is a transverse disc of cartilage between the two ossification centers and allows the bone to continue to grow in length after birth. It then closes. The EGP is a region of continuous chondroblast differentiation and maturation and can be divided into five zones:

The periosteum lines the outer surface of the diaphysis of the bone. It has a cellular inner layer, consisting of osteoblasts, and a fibrous outer layer. The endosteum lines the inner surface of the diaphysis of the bone. It contains osteoblasts and osteoclasts. Bone growth occurs by a shift in the equilibrium between osteoblasts and osteoclasts. Osteoblasts on the outside in the periosteum add bone to increase the bone's diameter. Osteoclasts on the inside in the endosteum remove this bone to maintain the bone diameter. When osteoclasts start removing less bone, or osteoblasts start adding more bone, the girth increases.

Primary bone has not yet been remodelled. It contains less mineral and more randomly arranged collagen fibers, known as trabecular organization. Remodelling of bone occurs by haversian canals. The osteoclasts dig out the canal longitudinally through the bone connecting with bone marrow cavity and periosteum. They are followed by anastamosing and branching blood vessels. Concentric bony lamellae are laid down with rows of interconnected lacunae containing osteocytes within. The osteocytes communicate by channels in young bones. Phased resorption happens concurrently.

Found in the limbs and act as levers for locomotion. An elongated diaphysis (shaft) and two epiphyses (ends), each of which encases a center for ossification.

Found in places of articulation, such as the carpus and tarsus. All dimensions are relatively equal, generally signifying one center of ossification.

Found in the skull, pelvic girdle, and scapula. It expands in two directions, with a broad surface for attachment of large muscle masses and protection of underlying structures.

Found in the vertebrae.

Eg. Patella and navicular bone. Found within tendons, where they change direction over prominences that would otherwise cause damage. They form synovial joints with major bones with which they are in contact. They also serve to displace tendon from the axis of the joint, increasing the leverage exerted by the muscle.

Excavated to contain air spaces, such as the skull in the instance of paranasal sinuses, and the post-cranial skeleton of birds. 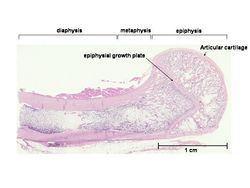 Bone is a hard, highly specialised connective tissue . It consists of interconnected cells embedded in a calcified, collagenous matrix. It is a living, dynamic, responsive tissue, growing and remodelling throughout life.

Bone is composed of:

Osteoid- An organic, uncalcified, homogeneous substance that stains light pink with H&E . Osteoid consists of type I collagen (90%), which resists tension, and bone-specific proteins (10%), including; Osteonectin, Osteopontin and Osteocalcin.

Mineral- An inorganic component that provides rigidity and consists of a crystalline lattice of calcium phosphate and calcium carbonate. It also contains Mg, Mn, Zn, Cu, Na, F. It accounts for 65% of bone.

A single layer of mesenchymal cells which synthesize bone extracellular matrix (osteoid). When active, they appear plump and cuboidal, with a basophilic cytoplasm. The cell membranes are rich in alkaline phosphatase (ALP). The cells are possibly involved in pumping calcium across membranes. They are promoted by growth factors and have receptors for PTH. They contract in response, which provides space for osteoclasts to attach. When they are inactive, there is less cytoplasm, so they become flattened.

Osteocytes are embedded in their own matrix; reside within lacunae and are interconnected via channels forming canaliculi. Canaliculi create connections to form a huge neural-like junctional organization. They contact osteoblasts and each other with cytoplasmic processes and reach through canaliculi in the mineralised bone matrix. Osteocytes regulate the composition of bone fluid.

Osteoclasts are giant (multinucleate monocytes) cells. Histologically, they are large, often multinucleated cells. They have an acidophilic cytoplasm. They sit in the bone surface depression known as, howship's lacuna. Osteoclasts respond to vitamin D by increasing their numbers and activity (parathyroid independent). Osteoclasts act to resorb the bone extracellular matrix (ECM). They firstly dissolve mineral followed by collagen, using the brush border. They do not have receptors for PTH, but do have receptors for calcitonin.

The normal progression of bone is from woven bone to lamellar bone, even in pathology, except for canine craniomandibular osteopathy and hypervitaminosis D, where lamellar bone is replaced by woven bone.

Woven bone consists of coarse collagen fibres. It is later removed by osteoclasts and replaced by lamellar bone. In adults, it is a sign of a pathological condition (e.g. fracture, inflammation, neoplasia).

Lamellar bone consists of orderly layers, which are much stronger than woven bone. There are fine collagen fibres in concentric or parallel laminae. There are two main types of lamellar bone:

A sheath covers the external surface of long bone. It is thicker in the shaft and thins over the epiphyses. It is composed of thin lamallae in a series of concentric tubes arranged around small central canals (collectively known as an osteone). It forms 80% of the total bone mass and consists of cells and interstitial substance - 30% ossein (type of collagen) and 70% minerals, especially calcium phosphate.

Stacks of parallel or concentrically stacked sheets arranged as rods, plates, and arches. In vertebrae, it forms flat bones and forms the hematopoeitic center of epiphyses of long bones. It contains no Haversian systems.

Formed on the periosteal surface of diaphysis. It accommodates rapid growth of large dogs and farm animals. Plates of woven bone from within the periosteum. As it forms, it fuses with the bone surface.

The periosteum is the specialised sheath of connective tissue covering bone, except at the articular surfaces. It is loosely attached, except at tendon insertions and bony prominences. Histologically, there is an outer layer which is fibrous for support, and an inner layer that is osteogenic. It consists of a rich supply of nerves and lymph vessels, including nutrient, metaphyseal and periosteal arteries. The normal flow of blood from the medulla to the periosteum is due to higher pressures in the medulla. Young animals have a greater blood supply.

Bone architecture adapts in response to the loads applied upon it according to mathematical laws;

Load: the external force placed on a structure, F.

Strain: the proportional change in the structure's dimensions.

Stress: the internal forces resisting the change in dimension caused by the load.

Cells use strain as a stimulus to adjust mass and architecture according to load. Resorption and osteogenesis happen concurrently to maintain bone integrity. This is mediated by two hormones:

Produced by chief cells in the parathyroid glands in response to decreased serum calcium. In response, osteoclasts increase in number and resorb mineralised matrix to increase Ca in blood.

Produced by C-cells in the thyroid glands in response to increased serum calcium. Inhibits osteoclasts.

In neonates, bone growth predominates and modelling is important. In adults, the formation of bone is balanced by resorption - remodelling. It continues throughout life under the influence of hormones and mechanical pressure. Bone resorption may exceed formation in pathological states (hormonal, trauma, nutritional) or in old age and disuse.

Click here for information on Bone and Cartilage Development.

Click here for information on bone and cartilage pathology.