Red bone marrow consists of blood vessels, sinusoids and a network of haematopoietic cells. Sinusoids are vascular components with an endothelial layer, basal lamina and an outer adventitial cell layer. The adventitia cells are also called reticular cells and these extend into the haematopoietic cells in sheets to provide structural support. They also produce reticular fibres and cytokines to help stimulate blood cell production. Histological sections show that the haematopoietic cells lie in cords. The cells in these cords form many different blood cell types but cells producing one cell type tend to be located in groups along the cords. 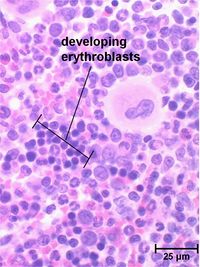 To enter circulation newly formed cells press against the sinusoid wall, temporally fusing to it and creating an opening. The cell then passes directly into the circulation and the membrane repairs itself. Mature erythrocytes immediately enter circulation, however the marrow stores leukocytes and consequently contains around ten times more leukocytes than found in circulation

Megakaryocytes reside alongside the sinusoid membrane but do not leave the tissue, rather they release their platelets and then withdraw from the membrane.

In some primates bone marrow acts as a primary lymphoid organ. Bone marrow is also a secondary lympoid tissue in other species.

It has little involvement in the primary immune response, but the migration of memory cells into the marrow from the spleen and lymph nodes means that during a subsequent exposure to an antigen it produces significant amounts of antibodies.

Bone marrow is a significant source of antibodies as a large population of antibody-producing cells (plasma cells) reside there. Macrophages and dendritic cells in the marrow remove foreign substance from the blood, a process which also occurs in the lymph nodes, spleen and liver.