The foetus triggers the onset of parturition, by initiating a cascade of complex endocrine/biochemical events. The foetal hypothalamo-pituitary-adrenal axis is obligatory for the initiation of parturition. 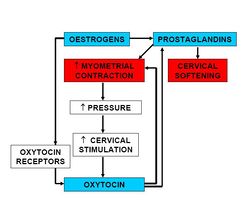 Details of oxytocin synthesis and secretion may be found in pituitary gland page.

Relaxin is a glycoprotein hormone. It is produced by either the corpus luteum or placenta depending on species. Its synthesis is stimulated by PGF2α. This causes softening of the connective tissue in the cervix and promotes elasticity of the pelvic ligaments, thus preparing the birth canal so that the passage of the foetus can occur with relative ease.

Role of Oestrodiol Elevation prior to Parturition

Species that depend on the Corpus Luteum

The goat, cow, sow and bitch depend on the corpus luteum. 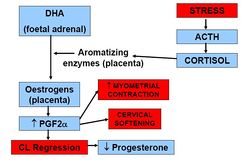 The foetus initiates parturition. For parturition to occur, progesterone production by the corpus luteum must be terminated. As the foetus grows in a restrictive environment, it becomes stressed. Stress leads to a rise in foetal ACTH. The rise in ACTH causes production of cortisol from the foetal adrenal glands. The rise in foetal cortisol leads to an increased oestrogen:progesterone ratio by upregulating aromatase enzymes, which convert androgens to oestrogens. Cortisol also reduces progesterone production.

Species that depend on Placental Progesterone

In late pregnancy, the ewe, guinea pig, queen and mare depend on placental progesterone. 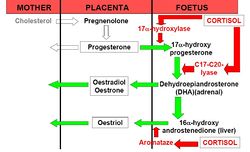 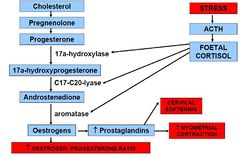