From WikiVet English
Penicillins
Jump to navigation Jump to search 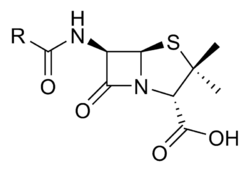 The Core Structure of Penicillin

The penicillins also inactivate an inhibitor of autolytic enzymes present in the cell wall, thus resulting in lysis of the bacterium.

Due to the lytic nature of the group of drugs they are considered to be bacteriocidal (ie kill bacteria) and time dependent killers.

Over the years different sub-groups of Penicillins have been developed; this is because many bacteria have developed beta-lactamases which will therefore reduce the action of the antibiotic.

If a beta-lactamase inhibitor (Clavulanic acid) is added to the drug formulation, the spectrum of most sub-groups is extended.

All the sub-groups behave in the same way pharacokinetically.

They are organic acids, hydrophilic and will ionise at physiological pH. They generally have poor oral bioavailability as they unstable in acid environments. They have a limited volume of distribution (0.2-0.3l/kg), this means the drug is mainly confined to plasma and interstitial space. As the are hydrophilic they can't enter cells and won't cross the blood brain barrier, unless it is damaged. They have short half-lives of about 0.5 - 1.2 hours. They are readily excreted by the kidneys, via tubular secretion in the proximal convoluted tubule. This results in high concentrations of the drug in urine.

This group of antibiotics on the whole are very safe.