Porcine reproductive and respiratory syndrome (PRRS) first appeared in the USA in 1987, although subsequent serologic evidence indicated that it had been circulating for some time prior to being recognised. The disease was seen in Europe in 1990 and reported in Humberside in the UK in 1991. PRRS is caused by an arterivirus, and leads to abortions, mortality and reduced growth, significantly impacting pig welfare and production economics worldwide. This disease is now found in most areas of the world where pigs are raised. Besides Europe and North America, it was identified in China in 1995 and is present in Japan, Vietnam, the Philippines, Malaysia, and Korea among other countries in Asia. Australia, New Zealand, several European countries are currently free of the disease.

The virus that causes PRRS is an arterivirus, within the Arteriviridae family. The arteriviruses are the only genus contained within the Arterivirdae family, and other members include the agent responsible for equine viral arteritis and lactate dehydrogenase-elevating virus of mice. The viruses are host-specific and antigenically distinct, and establish persistent infections after invasion.

The virus is spread by contact with infected pigs, and infection also be transmitted venereally via infected semen. Blood, saliva, urine, milk and semen from infected animals have all been shown to contain PRRS virus. Fomites, such as contaminated needles, boots, overalls and transport vehicles can also transmit PRRS, as can certain species of insects including house flies. Aerosol transmission is thought to occur, particularly under conditions of high humidity, low temperatures, and low wind speeds, but this has been difficult to reproduce in the field and experimentally. Once infected, adult animals shed PRRS virus for up to 86 days, and younger, weaned pigs for 157 days. Virus excretion in semen can persist for up to 93 days after infection. This lengthy persistence of infection is an important factor in the maintenance of infection within a herd.

Once PRRS virus gains entry to the host, primary replication occurs in regional or mucosal macrophages such as in the tonsil and the nasal and respiratory epithelium. After around twelve hours, viraemia occurs and the virus is disseminated systemically. The PRRS virus then secondarily replicates in the monocytes and macrophages in a wide variety of tissues. Other cells, such as fibroblasts, endothelial cell and smooth muscle may acquire PRRS infection, but only cells of the macrophage lineage have been shown to unequivocally support replication. The tropism for macrophages impairs the cellular immune response, and mucosal surfaces are also damaged. Viraemia persists for around 4-6 weeks in most infections, but lymphoid tissues can remain infected for extended periods of time: following experimental inoculation, PRRS virus has been detected for up to 225 days. Both cell mediated and humoral immune responses are induced by PRRS virus infection, and persistence of infection occurs despite this. 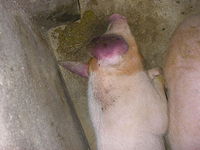 There appears to be two distinct clinical phases to PRRS: reproductive failure and post-weaning respiratory diseases. When sows are infected, a period of acute disease is seen which is characterised by lethargy, inappetance and pyrexia. Occasionally, the snout, ears and vulva can appear blue. These signs are generally mild, but occasionally severe infections can occur which are associated with vestibular signs, and death of up to 10% of the sow stock. The reproductive aspects of the syndrome are seen when sows become infected in the last trimester of pregnancy. Reproductive signs include increased numbers of stillborn piglets, mummification, abortions, premature farrowings and the birth of weak piglets. Lactating sows often display anorexia and agalactia, which leads to a rise in preweaning mortality. Signs are also seen in the piglets themselves, including a "thumping" respiratory pattern which on post-mortem examination is revealed to be associated with a severe, necrotising, interstitial pneumonia. Oedema may be seen around the eyes, and there is considerable variation in the size of piglets within litters.

Post-weaning performance is also affected, with daily live weight gain reduced by up 85%. Mortality in growing pigs can be increased by up to 25% when PRRS is present in the herd. Lethargy and a loss of appetite is seen in weaned pigs, as well as a failure to thrive. Breathing is laboured and there may be obvious respiratory distress. The skin can appear red and blotchy, with a rough hair coat.

Outbreaks of the reproductive form of PRRS reportedly last between one and four months, depending on the initial health status of the pigs and the management of the outbreak. However, the post-weaning respiratory phase can become chronic, creating major production problems.

The most frequently used diagnostic tests are an ELISA and an indirect fluorescent antibody test. In order for meaningful results to be generated, serum should be collected from around 20 exposed animals in the herds. Both of the ELISA and the IFAT tests measure antibodies against PRRS virus. Anti-PRRS specific IgM can be detected within 7 days of infection, and IgG can be detected within 14 days. Titres peak about 5–6 weeks after infection, and can persist for up to 144 days while circulating virus is present. Once virus ceases to circulate, antibody levels quickly drop. If titres are particularly high, exposure may be recent and the sampled population could currently be shedding virus.

Tests for the PRRS virus itself also exist. These include RT-PCR and virus isolation. For virus isolation, buffy coat, serum, lung, lymph nodes, spleen and tonsils are the specimens of choice. The virus is incubated with swine pulmonary alveolar macrophages, and cytopathic effect are seen in around four days. RT-PCR can be performed on whole blood, buffy coat and clarified homogenates of the tissues appropriate for virus isolation. The test is particularly useful for examination of mummified or aborted litters. Immunohistochemistry is also possible, and nucleic acid sequencing of the 5' end of the virus has recently become commercially available. This is useful for comparing isolates recovered from different sites in order to facilitate epidemiological investigations.

Although PRRS virus is capable of infecting many organs of the pig, gross lesions are usually only observed in the respiratory and lymphoid tissues. Both gross and microscopic lesions are most marked in neonatal and young weaned pigs.

After an uncomplicated PRRS infection in finishing pigs, gross lesions can vary from unremarkable to severe. In severe disease, lungs are mottled red and tan, and fail to collapse properly. The cranioventral lobes are worst affected. Lymph nodes appear moderately to severely enlarged, tan in colour and may be haemorrhagic with some strains of virus. Most PRRS virus-infected pigs are co-infected with one or more secondary pathogens, so pathology can vary quite widely depending on these. Microscopically, interstitial pneumonia is the typical finding. There is a mononuclear infiltration of the alveolar walls with type 2 pneumonocyte proliferation, and necrotic debris and macrophages accumulate in the alveolar spaces. In lymph nodes, follicular hyperplasia and necrosis may be seen. Non-suppurative meningoencephalitis and choroiditis is commonly present, but severity is highly variable.

There are no gross lesions noted in aborted or stillborn foetuses, but histopathology inconsistently reveals interstitial pneumonia, myocarditis and pulmonary arteritis. However, these changes are neither specific nor diagnostic for PRRS.

There is currently no known effective treatment for PRRS. Non-steoidal anti-inflammatory drugs have been used in an attempt to reduce fever, and appetite stimulants to counteract inappetance and poor weight gain. However, these appear to have minimal benefit. Antibiotics may be used to counteract secondary bacterial infections.

As treatment for PRRS is ineffective, prevention is very important. In herds where PRRS is not present, bought-in stock and semen should be PRRS-free, and any animals joining the herd should be quarantined on-site before being introduced to the cohort. Pigs should be tested on arrival to the unit, and again 45-60 days later before they join the main herd. In herds where PRRS is endemic, breeding gilts may be exposed to adult sows before they become pregnant in order to induce immunity. Existing infection can also be eliminated by multisite production and segregated early weaning, but the long-term risk of reinfection is high. Complete depopulation, disinfection and repopulation can also be successful, as can test-and-removal strategies.

Both modified live and killed vaccines are available. These are effective in controlling outbreaks and preventing economic losses.