From WikiVet English
(Redirected from Proencephalon)

The forebrain (proencephalon) is the largest part of the brain, most of which is cerebrum. Other important structures found in the forebrain include the thalamus , the hypothalamus and the limbic system. The cerebrum is divided into two cerebral hemispheres connected by a mass of white matter known as the corpus callosum. Each hemisphere is split into four lobes; the frontal, parietal, occipital and temporal lobes. The surface of each hemisphere is made up of grey matter known as the cerebral cortex and is folded to increase the surface area available within the skull. The cortex has roles within perception, memory and all higher thought processes. Inside the cortex is the white matter, within which are a number of nuclei (grey matter), known as the basal nuclei. The basal nuclei receive information from the cortex to regulate skeletal movement and other higher motor functions.

The thalamus functions to relay sensory information to the cerebral cortex and the hypothalamus, regulating visceral functions including temperature, reproductive functions, eating, sleeping and the display of emotion. The limbic system describes a collection of structures within the forebrain, including the amygdala and hippocampus, also known as the 'emotional brain'. It is important in the formation of memories and in making decisions and learning.

The thalamus has many functions including processing and relaying sensory information selectively to various parts of the cerebral cortex, translating signals to the cerebral cortex from lower centres including auditory, somatic, visceral, gustatory and visual systems and also regulating states of sleep and wakefulness. The thalamus plays a major role in regulating arousal, levels of consciousness and levels of activity.

The function of the pituitary is mainly related to the production of hormones as part of the Endocrine System. For further information on the pituitary gland please use this link: Pituitary Gland Anatomy and Physiology. 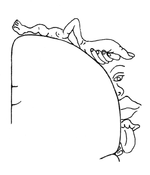 The sensory areas are the areas that receive and process information from the senses. Inputs from the thalamus are called primary sensory areas. Vision, hearing, and touch are processed by the primary visual cortex, primary auditory cortex and primary somatosensory cortex. The two hemispheres of the cerebral cortex receive information from the opposite (contralateral) side of the body. Areas with lots of sensory innervation, such as the fingertips and the lips, require more cortical area to process finer sensation. The association areas of the brain function to produce a perception of the world enabling an animal to interact with their environment effectively.

There are a number of anatomical areas of the brain responsible for organising this sensory information. The parietal lobe is located within the dorsocaudal aspect of the cortex. The temporal lobes are located laterally and the occipital lobes are located in the caudal most aspect of the cortex. The frontal lobe or prefrontal association complex is involved in planning actions and movement.

The motor cortex areas of the brain are located in both hemispheres of the cortex and are shaped like a pair of headphones stretching from ear to ear. The motor areas are related to controlling voluntary movements, especially fine movements. There are two main types of connection between the motor cortex and motor neurones found in the ventral horn of the spinal cord; the Pyramidal tracts and the Extrapyramidal tracts.

The olfactory bulb is responsible for olfaction and the bulb itself is located within the rostral forebrain area, supported by the cribiform plate and the ethmoid bone. The olfactory nerves are connected directly to the limbic system which is unique among mammalian sensory organs. As a result, olfaction plays a central role and is particularly important in regulating/stimulating sexual behaviour in many species.