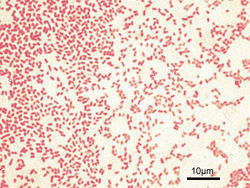 Pseudomonas aeruginosa is a species of the pseudomonas genus. It causes opportunistic infections requiring predisposing factors.

P.aeruginosa grows on few nutrients and can survive certain disinfectants. The bacteria has toxins and enzymes such as exotoxin A, phospholipase C and proteases that allow tissue invasion and damage. Elastase damages elastin in lung parenchyma and blood vessel walls. P.aeruginosa attaches to host cells via fimbrae and resists phagocytosis and complement via its LPS. It obtains iron from tissues.

P.aeruginosa causes haemorrhagic pneumonia and septicaemia in mink with 50% mortality via a secondary thrombocytopenic disease.

It can also cause deep pyoderma in all species.

Specimens for diagnosis should include; pus, respiratory aspirates, mid-stream urine and ear swabs. Colonies can be identified on blood and MacConkey agar and are oxidative, not fermentative. The colonies only grow in aerobic conditions and produce diffusable pigments including pyocyanin, a green pigment, and fluorescine. On MacConkey agar, colonies have a fruity odour, are lactose negative and are pale in colour.

P.aeruginosa bacteria have multiple antibiotic resistance, mediated by large plasmids carrying resistance genes and also chromosomal genes and mutations. Gentamicin or tobramycin with carbenicillin or ticarcillin, as well as polymyxin B are effective.