The actions and metabolism of endocrine glands are poorly understood in comparison to mammals. 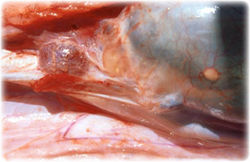 The single thyroid gland is roughly spherical and enclosed in a connective tissue capsule. It lies just cranial to the heart and ventral to the trachea. The thyroid, which is under pituitary control, appears to play an important role in shedding and growth. Accidental surgical removal of the thyroid may increase shedding, which is the opposite reaction to the one in lizards. In some species it has been reported that thyroid extract administration inhibits moulting.

Reptiles usually have two pairs of thymus glands located cranial to the heart. They are closely associated with the common carotid artery, jugular vein and vagus nerve. In snakes there are significant species differences with some boids, colubrids and crotalids having only a single bilateral lobe. The thymus decreases in weight with age.

There are usually two pairs of parathyroid glands. They measure about 0.5-1.0 mm in diameter and are located cranial to the heart. The caudal parathyroids are often associated with thymic tissue. The parathyroids play a very important role in calcium metabolism and accidental surgical removal will result in hypocalcaemia and tetanic convulsions.

The pituitary gland lies on the ventral surface of the brain and consists of an adenohypophysis and a neurohypophysis that is associated with the hypothalamus. There are significant interspecies differences in morphology but it appears to have a similar function to the pituitary of mammals.

Exact location and anatomical relationships of the pancreas show much variation among species. It is often attached to the spleen to form a slenopancreas. As in mammals the pancreas is both an exocrine and endocrine organ. In some genera, the islet tissue is formed into giant islets, rather than scattered randomly throughout the pancreatic exocrine tissue.