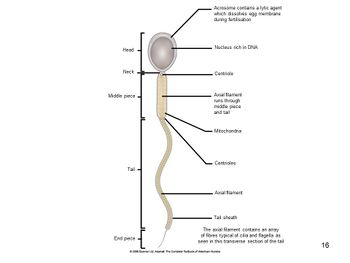 Spermatogenesis is the process of the gradual transformation of germ cells into spermatozoa. It occurs mainly within the seminiferous tubules of the testes and can be divided into three phases, each of which is associated with different germ cell types:

Unlike the female production of gametes which occurs entirely before birth, with gamete maturation occurring in a pulsatile fashion after puberty, males produce gametes continuously from puberty onwards for the rest of their reproductive lives and the release of the gametes is constant. 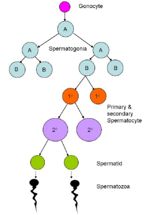 As the germ cells progress through their stages of development they move slowly from the basement membrane of the tubules through the tight junctions between the Sertoli cells into the tubular lumen. 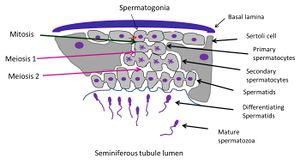 Stem or A spermatogonia located in the basal region of the tubular epithelium undergo mitosis. The progeny of these divisions maintain their own numbers as well as giving rise to several interconnected B spermatogonia (the number of these arising from a single A spermatogonia is species dependent). B spermatogonia divide to give rise to primary (1o) spermatocytes. All descendants of a B spermatogonium remain connected by cytoplasmic bridges, forming a syncytium - like cell clone which undergoes synchronous development.

The process of meiosis occurs over a long period, with prophase of the first meiotic division taking up to three weeks [1]

This phase is also known as spermiogenesis.

Spermatids undergo transformation into spermatozoa. Many changes occur within the cells, the three major ones being:

i) formation of the acrosome, which covers the cranial part of the head. The acrosome will contain hydrolytic enzymes to allow fusion of sperm and egg for fertilisation.

iii) growth of the tail opposite the acrosome, and loss of excess cytoplasmic material which is shed as a residual body. The body is phagoctosed by the Sertoli cells.

The morphological changes occurring during this process can be seen if sections of different seminiferous tubules are examined.

For a diagrammatic representation refer to Figure 2.

Spermatogenesis is controlled by a complex feedback mechanism involving the hypothalamus, anterior pituitary and testes. Gonadotrophic releasing hormone (GnRH) is released by the hypothalamus in a pulsatile manner and travels through portal vessels to the anterior pituitary, where it acts of the gonadotrophic cells. These cells respond to the stimulation by producing either follicle stimulating hormone (FSH) or luteinising hormone (LH) depending on the pattern of GnRH secretion.

LH and FSH travel in the bloodstream to the testes, where LH acts on the Leydig cells to stimulate them to convert steroids to testosterone and other androgens, which in turn contribute to the stimulation of Sertoli cells.

FSH acts on the receptors of Sertoli cells and, in combination with testosterone, stimulates many functions, including synthesis and secretion of oestrogen, inhibin and many other products, meiosis, spermatocyte maturation and Leydig cell function.

Inhibin, testosterone and oestrogen feedback negatively on the anterior pituitary and hypothalamus to suppress secretion of gonadotrophic hormones (Figure 3).