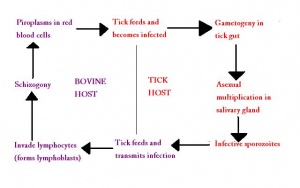 T. parva is the species of most veterinary importance, affecting cattle in Central and Eastern Africa and is the cause of East Coast Fever.

Other species cause significant economic losses in the Mediterranean, Middle East and Northern Africa.

Theileria are transmitted via the Haemaphysalis and Rhipicephalus species of tick vectors.

Sporozoites enter mononuclear cells of the host and develop into trophozoites and multinucleate schizonts by asexual reproduction. This process stimulates proliferation of the host cells, allowing further multiplication of the parasite. The local lymph nodes are first infected.

Schizonts then disseminate through the lymphoid tissues before differentiating into merozoites.

The merozoites enter the erythrocytes and form piroplasms which are infective to ticks and capable of sexual reproduction.

Sexual reproduction occurs within the nymph and larval stages of the tick and the final infective stage is present within the salivary glands and is transmitted to mammalian hosts when bloodfeeding.

Transmission in the tick is then trans-stadial.

Lymphocytes are killed by invading protozoa and later in disease, lymphopoeisis is reduced and prevented.

T. parva is primarily a parasite of African buffalo and the cause of Bovine Theileriosis and East Coast Fever. It may be transmitted by a wide range of tick hosts although Rhipicephalus appeniculatus is the most importnat in the field.

Sheep and mice can also be infected.

T. annulata is also a cause of Bovine Theileriosis. The parasite infects macrophages and B Lymphocytes forming round or oval piroplasma within host erythrocytes.

It also infects sheep and yaks.