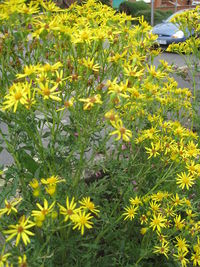 Toxicology is the study of chemicals or substances that can damage tissues or destroy life. Such chemicals and substances are commonly referred to as poisons, and can include plants, pharmacological agents, heavy metals, herbicides, insecticides, rodenticides, mycotoxins and snake bite venoms. The key to understanding the effects of potential poisons is to recognise that they all have a dose dependent adverse effect - even water can be toxic when administered or consumed in large quantities!

Exposure to a toxic substance does not always result in poisoning - the substance must be absorbed and react with tissues/organs for toxicity to occur. The study of this is known as toxicokinetics. The incidence of poisonings in animals in the UK is not specifically documented as there is no legal obligation to report cases, but the Veterinary Poisons Information Service do offer 24 hour advice and guidance on potential poisoning cases. Incidents associated with pesticide poisoning can be investigated via the Wildlife Incident Investigation Scheme.

The toxic effects of substances can be categorised in a number of different ways:

In addition, toxic effects can be divided into:

There are 4 aspects to toxicokinetics:

The rate of absorption is dependent on the route of administration and the bioavailability of a substance.

The route of administration is significant because of the natural barriers that exist which may prevent or lessen a toxic effect by reducing the dose absorbed. Gastric acid and the low pH of the stomach are significant barriers to the absorption of swallowed substances, but conversely, substances that cause local irritation to the intestinal lining, where most absorption will occur, can enhance uptake as a result of this disruption to the gastrointestinal barrier. In addition, some drugs can increase absorption by utilising transport carrier systems present in the GI tract, and lipid soluble compounds will be more readily absorbed across the GI epithelium. Dermal absorption is more readily achieved in people where there is no fur and an increased vascularity in the dermis, but dermal absorption in animals is increased in areas where there are abrasions, waterlogged skin of exposure to organic solvents.

The distribution of a toxic substance depends upon:

Blood flow explains the susceptibility of certain body organs to toxicity, such as the liver, kidney, brain and heart which are highly perfused, and bone which is relatively well protected because of poor blood perfusion. Toxins that are absorbed orally pass into the portal system into the liver - the periportal area is often where highest concentrations of toxins can be found.

In some tissues there are additional barriers to compounds - the blood brain barrier protects the CNS from water soluble compounds and infectious agents. Lipid soluble substances can cross this barrier - other mechanisms for crossing natural barriers include cellular transport mechanisms (e.g.cyclosporin) or endocytosis (insulin accesses cells in this fashion).

Protein binding can have a number of effects on a potential toxin. When bound to a protein a toxin is usually inactivated, but it cannot be excreted in this form so accumulation can occur. Toxicity can occur when protein levels are low (hypoprotinaemia) or when another substance competes for the protein binding site - Warfarin is 97% protein bound once absorbed, but can be displaced by NSAIDs and Sulphonamides.

Metabolism may create a toxic byproduct - this is the case with paracetamol and aflatoxin poisonings, or may reduce the toxicity of a substance e.g. Ivermectin metabolites demonstrate reduced toxicity. Alternatively, metabolism may make little difference to the toxic affects of a substance so this effect is specific to individual substances and drugs. Commonly, sites that undergo metabolism (usually ones that express cytochrome P450) are the targets of toxic effects - the liver is the main organ of metabolism, but the kidneys, lungs, nasal epithelium, eyes and GI tract are also targeted because of cytochrome P450 activity.

Urinary and faecal excretion are the most notable routes clinically - many substances will require metabolism prior to excretion. Excretion in milk can raise concerns for suckling animals and public health issues.

Rates of excretion can be increased by:

Some toxins are specific to certain species - chocolate poisoning in dogs for example could in theory affect cats in a similar way but their dietary habits mean they are far less likely to consume large quantities of chocolate of their own volition. Cats lack some glucuronyl transferases that are important for glucuronidation, so drugs such as aspirin, paracetamol, morphine and hexachlorophene have a prolonged half life because these chemicals are metabolised and excreted as glucuronide conjugates. In terms of toxicity, this mechanism increases the risk of accumulation and therefore increases the likelihood of toxic effects occurring.

Neonates have a relatively poorly developed GI barrier and less efficient renal function, both of which leave them vulnerable to toxic insults. Organs that develop after birth are more susceptible to injury - notably the CNS and the kidneys. In some instances sequestration occurs into actively growing tissues (e.g.tetracyclines and fluoride into growing teeth and bones).

Conversely, increasing body fat that occurs with age can be a risk factor for toxin accumulation in adipose tissue (organochlorides).

There are several classes of drugs that are nephrotoxic, and any underlying condition which reduces renal blood flow or known renal failure will increase the toxic effect of the substance. Several classes of antibiotics are nephrotoxic - aminoglycosides (particularly neomycin and streptomycin, sulphonamides, Amphotericin B and Oxytetracycline (cattle and dogs seem particularly susceptible). The coccidiostat Monensin which is commonly added to cattle and chicken feeds is nephrotoxic to horses - it damages muscle tissue too. Other organs which can be specifically affected by drugs include ototoxicity associated with Gentamicin, and liver toxicity from aflatoxins produced by Aspergillus species that grow in certain cereal grains, most notably corn.

It is probably a little unrealistic to be able to diagnose a poisoning case on initial examination. Bear in mind malicious poisonings in particular are extremely rare but frequently suspected by owners! Symptomatic therapy is usually the way forward, as so few poisons have a specific antidote (rat bait poisoning and adder bites being a noticeable exception). A general approach to a suspected poisoning case should include:

Investigation of sudden death cases in large animals MUST start with a check for ANTHRAX before any further examination is carried out.

Try and examine the animal in the place where it fell so that you can look for signs of a struggle/convulsions or any obvious poisons nearby such as yew trees. Look for evidence of lightning strikes too, such as a damaged tree nearby. Check food and water troughs carefully for signs of any contamination. Where groups of animal are affected, examine all the animals present carefully using a full clinical examination as you may get a whole range of symptoms and abnormalities from individual animals which will increase the accuracy of your final diagnosis. Make very careful notes as your findings may well become crucial at a later date if any further investigation (or court case) is required. Approach these cases as a search for clinical disease or accidental death as this is far more likely than poisoning statistically. As always, take a full clinical history from the owner.

Note any signs of struggle and check the mouth carefully to check for substances such as yew. Check for external sign of trauma or burning (lightning). Open the carcass carefully noting any unusual smells present. Phosphorous poisoning gives a faint smell of garlic, metaldehyde poisoning causes a formalin smell, phenol poisoning smells like carbolic soap and cyanide poisoning created a 'silver polish' smell. These are quickly lost once the carcass has been opened. Check the mucous membranes - bright red membranes can suggest cyanide poisoning, brown membranes are associated with nitrate poisoning. Check for evidence of internal bleeding, and examine the entire GI tract carefully. Some plant toxins such as ragwort demonstrate delayed toxicity so are not detected in the GI tract at time of death. Examine all internal organs, recording the condition of target organs such as the gut, liver, kidneys lungs, heart and CNS. Take the time to contact your regular laboratory and ask them for advice on what samples to collect for laboratory analysis. Always collect duplicate samples in case of any postal delivery problems and label fully at the time of collection. Fresh (or frozen if necessary) samples are often required for analysis of poisons, and faecal and urine samples should be free from preservative. Use glass rather than plastic pots and record all the samples collected. Formal saline samples are indicated where histology is required.