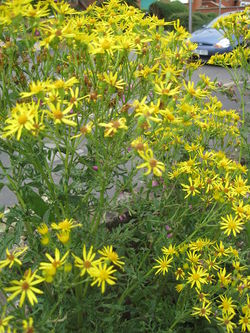 Ragwort (Senecio jacobea) is part of the daisy family, a flowering plant with completely yellow flowerheads. It commonly grows on wasteland and grazing pastures. It is poisonous to livestock with horses and cattle being more susceptible than sheep. When ingested over long periods of time it causes hepatotoxicity which in the severe form is invariably fatal. Exposure to the toxin is usually via ingestion of contaminated hay or silage as the animal will avoid it in the fresh form.

The toxin is a pyrrolizidine alkaloid which is converted in the body to the toxic intermediate pyrroles and their esters which cause intitial and continued damage to hepatocytes. They have an anti-mitotic effect whilst allowing continued synthesis within the cell and its nucleus resulting in a marked increase in the size of the hepatocytes. The attempted repair by fibrosis aids the shunting from the portal triads to the central vein, thereby bypassing the hepatocytes and resulting in the clinical signs associated with liver failure.

Hepatotoxicity due to ragwort poisoining occurs mainly in horses and cattle grazing highly contaminated pastures or contaminated roughage over long periods of time.

On gross post mortem examination the liver is small, dense and fibrotic with prominent biliary tracts.

There is no corrective treatment for the liver damage caused by ragwort poisoning, supportive treatment can improve quality of life and minimise some of the clinical signs by reducing the workload of the liver. Small, frequent feeds should be given 6 times a day and should consist of a high quality energy and protein source. Stomach tubing may be necessary if the horse is inappetent. Supplementary B vitamins may also be beneficial and can be given orally or parenterally.

Horses with chronic liver failure due to ragwort poisoning have a poor prognosis for survival as the damage to the liver is severe by the time clinical signs are obvious.