A large pedunculated (Type 1a, fibroblastic) sarcoid. This was removed using laser surgery and after three years no recurrence was present.(Image courtesy of The Donkey Sanctuary) 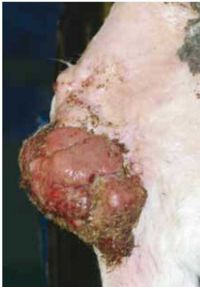 A large fibroblastic (Type 2, sessile) sarcoid on the medial stifle region that recurred each time following ill-advised attempts to remove it surgically.(Image courtesy of The Donkey Sanctuary)

This is by far the commonest skin tumour of the donkey worldwide and it has, therefore, been the subject of a considerable research effort centred at the University of Glasgow in particular, in co-operation with The Donkey Sanctuary.

A virus aetiology has been suggested, but the epidemiology in both horses and donkeys is not fully explained by this possibility. There are clearly aspects of oncogenic mechanisms that are involved in the condition. There are families that appear to be particularly susceptible and there is much anecdotal evidence of ‘contagion’.

There is no doubt that donkeys are severely affected, but the type and distribution of the sarcoid is somewhat different from that seen in horses. Donkeys appear to be more liable to severe, invasive and fibroblastic lesions. Occult and verrucose sarcoids are less often reported, although whether this is because they are not recognised as easily, or whether they are genuinely less prevalent, is unknown.

Predilection sites for sarcoid in donkeys include the face (especially around the mouth and eyes) and in particular the groin and sheath regions.

Any mass around the eye should be considered for sarcoid, as it is a predilection site. It is normally obvious by its appearance and nature.

Notwithstanding the diagnostic benefit that can be derived from biopsy it is probably unwise to biopsy a sarcoid lesion without a plan for its immediate treatment.

Prompt action must be taken. Referral should be considered, as the treatment options are limited. Take a photograph and describe precisely if advice is sought.

The treatments available are very limited and all have problems of one sort or another. The reality is that early treatment of any sarcoid may serve at least to limit the long-term severity, but ill-advised attempts that lack proper thought may simply exacerbate the problem.

Surgical excision may be an effective option where the limits of the sarcoid can be defined, but simply debriding the bulk of the lesion or failure to include a wide enough margin may result in a dramatic deterioration.

It is now well established that recurrence at the site of a sarcoid excision surgery is a common feature and that this can arise either from partial excision or from seeding of the operative site with cells from the lesion itself. In D. Knottenbelt’s experience, the latter results in more extensive exacerbation than the former.

Cryosurgery is also possible but suffers from the same limitations. The hitherto recognised ‘remote’ effects on sarcoids at other sites (suggested to be due to haematogenous cryo-antigens released into the blood) do not occur in donkeys in D. Knottenbelt’s experience. Cryosurgery is limited in its efficacy to small lesions in convenient sites and to limited numbers. The simple application of liquid nitrogen to the skin of any animal without proper control or the use of thermocouples and uncontrolled freezing with liquid nitrogen applied directly is totally unacceptable as a veterinary procedure.

‘Burning’ the lesions with red-hot irons and electrically heated wires are totally unacceptable – they are illogical, cruel and do nothing to help the disease. However, there are anecdotal reports of post-excisional thermal cautery carrying a better prognosis than surgery alone.

Laser surgery and diathermy are logical provided that they are carried out under controlled conditions by experienced surgeons.

Immunological mechanisms may be of value. There are anecdotal reports of the benefits of autologous blood injections but it is very hard to see any immunological benefit from this approach. The reality is that a few cases do seem to resolve spontaneously (although this seems to be less common in donkeys than in horses).

The use of intra-lesional BCG has been advocated and this appears to be a useful, but by no means certain, treatment for localised nodular and fibroblastic lesions around the eyes of the donkey. The critical factors appear to be the true intra-lesional injection; peri-lesional injection has no material benefit and risks the development of anaphylaxis. The mechanism for the effects of BCG are probably due to its intense chemotactic nature: macrophages and neutrophils and some mononuclear cells are actively drawn into the site and remove cells to which the BCG has adhered. Repeated injections are required and, as the tumour becomes necrotic and decays, true intra-lesional injection becomes more difficult.

Topical cytotoxic compounds based on heavy metals and cytotoxic and antimitotic chemicals, such as cisplatin and 5-fluorouracil, are valuable because they are convenient and relatively cheap. AW4-LUDES from Liverpool University is possibly the best known of these. Often these are the only material options available. They do, however, cause much tissue necrosis and some pain is inevitable. The results suggest that some localised lesions, and those that have a superficial nature, are more susceptible to the methods, but again there are wide variations in response and not all lesions will respond.

There are many questionable materials that purport to be effective treatments, but most of these (if not all) have no proven efficacy and have not been studied properly. For the most part unproven and non-veterinary treatments should be avoided as far as possible. The gold standard for treatment of the equine/asinine sarcoid is radiation but the availably of teletherapy and interstitial brachytherapy is very limited. The expense and practicality are severely limiting factors. 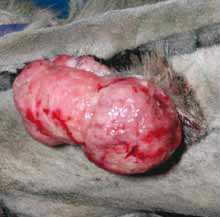 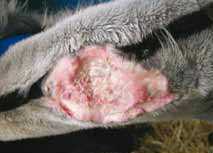 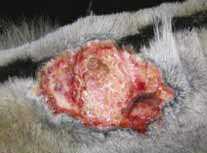 Healing of wound (Image courtesy of The Donkey Sanctuary)

Sarcoid transformation at wound sites is a very common (and increasingly important) reason for wound healing failure. Sarcoid fibroblasts are a strong inhibitor of wound healing and the extent of the sarcoid within the wound/granulation tissue needs not to be high for inhibition to occur. The extent of the transformation is sometimes very limited but the effects remain profound. Healing is inhibited until all tumour cells are removed.

Confirmation of the problem is not always easy. Multiple biopsies from different parts of the tissue should be taken to ensure the maximum chance of finding it.

Special precautions such as early dressing application and particularly control of fly contact should be taken to protect wounds on donkeys that already have sarcoids at other sites. Wounds that involve sarcoid tissue are extremely dangerous because they are very difficult and sometimes impossible to treat.