Although transition through the chronic inflammatory stage is almost inevitable in naturally occurring wounds healing by second intention, it is the most undesirable event in the healing continuum. Factors that will adversely affect wound healing are described below. The factors listed should always be considered prospectively when an acute wound is being assessed and retrospectively to seek an explanation for possible chronic non-healing wounds. In this way immediate measures may encourage healing and removal of long-standing complications may then encourage natural healing to proceed. 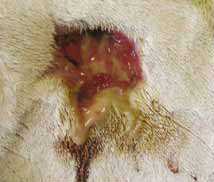 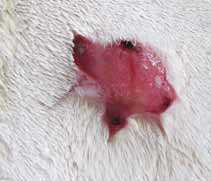 Infected wound after cleaning (Image courtesy of The Donkey Sanctuary)

Infected wounds certainly heal slower than uninfected ones. Depending on the circumstances, the species of bacteria will vary. For example Gram-negative species from faecal contamination will often infect a wound on the foot or distal limb. Staphylococcal and Streptococcal infections are common contaminants of skin wounds because they may be normal skin commensals.

During the first few hours after wounding bacteria will not be adherent to the wound and so the wound is considered to be contaminated. Only once they adhere and start to replicate is the wound described as infected. Once bacteria are established within the wound they are more difficult to remove/control and will inevitably have a harmful effect on healing.

Bacterial species (such as Pseudomonas, Baccillus or Proteus as well as some fungi) that produce collagenase (or other destructive) enzymes have a profound effect on healing by destruction of the collagen matrix, and so the inflammatory response cannot effectively close the wound. Infection with Staphylococcus aureus can cause pyogranuloma within the wound site. Clinically this resembles both granulation tissue and sarcoid.

Parasitic and fungal infections can occur under particular circumstances. Infestation, for example, with Habronema musca or the larvae of certain flies (myiasis) retards healing. The larvae of Lucilia sericata, however, have been found to have a beneficial debriding effect in some wounds under controlled conditions (Mulder, 1989), but others can be highly destructive (e.g. Calliphora spp. and Sarcophaga spp.).

Infection of any sort should be minimized by rapid attention to a wound and by appropriate use of topical or systemic antimicriobial agents (see protocol below). Controlling infection can be problematic. Topical antibiotics and antiseptic solutions may help but will also almost inevitably affect the healing process. The benefit must be carefully weighed against the disadvantages and only when a clear advantage is present can topical treatment be justified. Delivery of parenteral antibiotics to a wound site is unpredictable; usually it is too slow and too weak to achieve effective minimum inhibitory concentrations (MIC) in the wound to do anything useful. Nonetheless antibiotics form a main pillar of wound management. 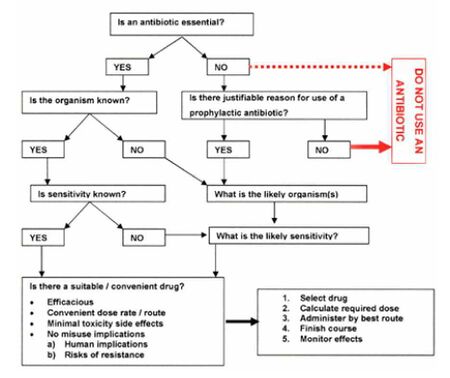 Foreign bodies (including sand or grit particles, wood or other plant matter, metal, glass, etc.) are one of the commonest reasons for non-healing wounds and may be difficult to identify in a wound bed even when radiography and ultrasonography are available.

All foreign matter must be removed from a wound site, but the retained foreign bodies may be very small, making removal difficult. These cases often benefit from application of delayed primary wound healing.

Wound lavage is used to remove adherent and non-adherent bacteria and foreign matter from the wound without compromising the physiological status of the tissues. The type of fluid and the pressure of its delivery are critical factors. A physiologically sound fluid at body temperature is a significant help. Fluids with tissue toxicity should not be used. To overcome bacterial adhesion, the ideal pressure is 7-10 psi.

Once the wound is clean and free from any contamination it can be treated according to its type.

Necrotic/devitalized tissue of any type (including bone, tendon, ligament, skin, connective tissue or muscle) retards healing significantly. Often it is not possible to identify what tissue is viable and what is not in an acute traumatic wound, but natural demarcation usually becomes more obvious with time. Although in most cases demarcation of devitalized and necrotic tissue is a natural part of the healing process, in some cases necrotic tissue is slow to manifest. For example, tendon, ligament and bone are often slow to exhibit patent non-viability and so it may be some weeks or even months before the necrotic tissue is obvious. Where these tissues are involved in a wound, slow healing and complications can be expected.

Careful debridement of all non-viable tissue at the initial stages of a wound produces a significant benefit and positively aids healing – provided of course that the non-viable tissue is recognisable. The key objective of acute wound management is the removal of non-viable tissues, foreign matter and bacteria, and the conversion of the wound to ‘surgical status’. Such an approach will minimize the healing time. However, there are circumstances when removal of tissue must be very carefully considered. For example, no skin should be removed from wounds involving the eyelids because the consequences of deficits are serious.

Movement at the site or in the attached tissues delays healing. In some cases the threat of movement is obvious. For example wounds involving the digital flexor tendons often fail to heal because the tendon continues to move at every step. Movement over joints and outward excursion of the heels during weight-bearing can place severe strains on the soft granulation tissue bed and non-healing clefts may develop that easily become infected.

In the early stages of a skin wound, measures taken to limit or eliminate local movement may be very helpful. It is common practice to restrict movement as soon as possible by application of a firm restrictive bandage (e.g. Robert Jones Bandage) or even a rigid limb cast. The value of immobility cannot be overstated.

Management procedures for such wounds involve reconstructive surgery. Restoration and reconstruction of as much tissue as possible is usually a good objective, but every decision needs to be considered as part of the healing process. Moist wound healing methods involving the use of hydrogels or moisture donating or preserving wound dressings will help to preserve the exposed tissues and thereby prevent further ‘die-back’ of the injured structures.

Blood is an essential component of the healing process. From the moment of injury it plays a vital role in the repair mechanisms. Disruption of major veins may have limited harmful effects on the wound, but laceration of an artery may be very serious especially if (as in the case of the distal limb) there is a poor or absent collateral circulation. Disruption of end-arteries can be catastrophic with the development of ischaemia (gangrene). The lack of a pulse in distal major arteries or a much lower temperature of the structures distal to the injury can identify this in the early stages. Assessment of distal pulses is therefore a critical aspect of wound management, especially where there is a history of major bleeding and/or an anatomical possibility of arterial damage.

Where a skin flap is considered non-viable, but is retained as a biological cover, the skin margins should probably not be sutured because the disruption/dehiscence of the wound will have an adverse effect on the proximal edge of the wound. It is common practice to suture the skin flap slightly distal to the original wound line so that the flap has no tension and primary contraction can be tolerated. Naturally the wound must be surgically clean before the flap is placed over the wound site. Once the flap has become necrotic and is serving no useful purpose then it can be removed and the wound dealt with accordingly.

Oxygen is a vital part of the wound repair process. Anaerobic conditions may arise if the wound contains both a disrupted blood supply and an enclosed surface. Puncture wounds are notorious for the development of these conditions and this provides an ideal circumstance for some of the most serious Clostridial infections. Clostridium tetani is the classic anaerobic wound contaminant and is widely feared. Penicillin is highly effective against Clostridium spp. bacteria and there is no rationale for using any other antibiotic. A fully vaccinated donkey will not contract tetanus because vaccination is highly effective.

Wounds with impaired oxygen delivery require careful management to eliminate anaerobic conditions and encourage a good oxygen delivery through angiogenesis. The health status of the donkey with respect to anaemia and cardiovascular function must be considered. 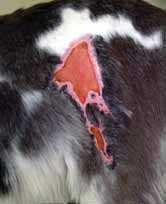 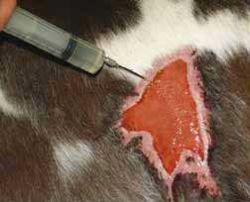 The management of such wounds centres on elimination of the repeated trauma. Alteration of the type of use or the tack arrangements may be just as helpful as any sophisticated wound management system and dressings.

Each wound will have local factors that may either be a valuable aid in the process of healing or may have potentially harmful effects. Local exudation and accumulation of wound exudate and other body fluids in the wound site may be important inhibitors of normal wound healing. Some significant local factors that inhibit healing include:

These factors may be more or less easily identified but every wound should be critically assessed to see if any of them could or will result in reduced healing. Measures to correct the problem will involve specific local management of the wound.

The health status of the animal itself is a vital part of the healing process. A healthy, well nourished and fit animal will always heal better than one that has concurrent disease or malnutrition. Poor body condition is a common and serious problem in many parts of the world where there are working horses, mules and donkeys. Old age, malnutrition and overwork is often complicated by other factors that retard healing. Even a modicum of rest and nutritional improvement usually has a dramatic positive effect and so this should be encouraged.

All physiologically unsound materials are unacceptable in modern wound management practice. The concept of physiological compatibility should be the overriding sentiment when dealing with a wound and any non-physiological substance must have a distinct clinical advantage to compensate for the certain physiological harm.

One of the commonest iatrogenic inhibitors of wound healing is the use of harmful chemicals. There are no truly bland chemicals! And there is certainly no place in modern wound management for strong or weak acids or caustic chemicals. Over-strength antiseptics can be just as harmful as the more obvious ‘bad’ solutions and applications.

Individual horses (and genetic lines) heal less well than others. Larger horses heal less efficiently than ponies, especially in the distal limb regions. Horses with congenitally weakened skin (e.g. hyperelastosis cutis/Erlos-Danloss Syndrome) have fragile skin that is more easily traumatized than normal, and wound healing may be very protracted. Most of these congenital conditions are very rare but should be considered when a horse or donkey consistently fails to heal and/or is ‘liable to trauma’ that consistently fails to heal for no apparent reason.