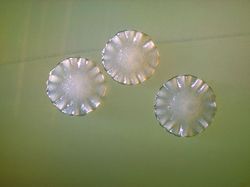 The actinomycetes comprise a group of procaryotes that have the ability to form Gram-positive, branching filaments of less than 1μm in diameter. The main animal pathogens in the actinomycetes are the genera Actinomyces, Nocardia and Dermatophilus.

Streptomyces species are also included in this group, and they are prolific producers of antimicrobial substances.

These are gram-positive diphtheroid or filamentous rods, about 0.5μm in width. Branching filaments are usually found in pathological specimens. In culture, diphtheroid forms predominate.

Actinomyces species have distinctive cell wall constituents. Surface fibrils in A. viscosus may be adhesins for host cells or other bacteria. Surface antigens are related to chemotactic and mitogenic activities.

Animal Actinomyces species are capnophilic or facultative anaerobes. All require rich media, preferably containing serum or blood. No growth occurs on Sabouraud's agar. Development of macroscopic colonies may require several days at 37°C. Colonical morphology varies between and within species.

Actinomyces are catalase-negative, with the exceptions of A. viscosus and A. canis.

Actinomyces species live in the nasopharyngeal and oral mucosa, and secondarily in the gastrointestinal tract.

Sinus tracts carry the exudate to the outside. This often contains 'sulfur granules' which are bacterial colonies surrounded by clubs.

Diseases caused by Actinomyces species include:

Ruminants: A. bovis causes lumpy jaw.
Horses: Actinomyces species have been isolated from cases of Poll Evil and Fistulous Withers as well as in cases of cervical lymphadenitis.
Dogs and cats: Actinomyces are common causes of pyonecrotic processes, usually associated with a foreign body such as a migrating grass awn. Commonly isolated species include: Actinomyces viscosus, Actinomyces hordeovulneris, A. canis, A. catuli.
Pigs: mastitis, pneumonia and abortion have all be associated with Actinomyces infections.

Gram-stained Nocardia species are indistinguishable from Actinomyces species. They are partially acid-fast so a Ziehl-Neelsen stain would differentiate them from Actinomyces. They alternate between the coccobacillary resting phase and the actively-growing filamentous forms.

The cell wall is typical of gram-positive bacteria. It contains a high concentration of lipids. A superoxide dismutase acts as a virulence factor.

Nocardia species are obligate aerobes growing on simple media (Sabouraud's) over a wide temperature range. Colonies are opaque and variously pigmented. The colony surface, which is waxy to powdery to velvety depending on the abundance of growth, wrinkles with age. The diameter of colonies may reach several centimetres.

Biochemical activities include catalase production and acidification of various carbohydrates.

Pathogenic Nocardia species are saprophytic and found in many climates in soil and water, either as indigenous flora or as contaminants.

Diseases in different species include:

Dermatophilus congolensis is the only species, and is a gram-positive filamentous bacterium.

The reproductive unit of the bacterium is the motile coccoid zoospore. Upon germinating, the zoospores sprout a germ tube which elongates and thickens, dividing transversely and longitudinally, forming a strand several layers thick. Multiflagellated zoospores are liberated as the strand disintegrates.

D. congolensis grows on blood media, but not on Sabouraud's agar. It is aerobic and capnophilic. Haemolytic colonies develop within 48 hours and vary from mucoid to viscous and waxy and whitish-grey to yellow. Catalase, urease and proteases are produced. The bacterium survives well in the soil and on fomites.

D. congolensis does not multiply saprophytically. Its reservoir is infected animals. Cattle, sheep, goats and horses are common hosts but it has been diagnosed in many other animals.

It causes an exudative dermatitis, with activity confined to the living epidermis. There is a scab consisting of layers of neutrophilic exudate and keratinising epidermis. Wetting favours expansion of the lesions.

It causes lesions on the back (rain scald in horses, lumpy wool in sheep), feet and legs (strawberry footrot in sheep and grease heel in horses).

These are not pathogenic but are similar to Nocardia species in cultures. Some species produce antibiotics, and they are common laboratory contaminants.