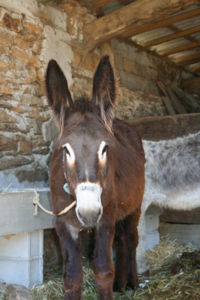 Image courtesy of The Donkey Sanctuary

Antimicrobial agents should only be used in situations where the diagnosis warrants this. The use of antimicrobial agents for relatively trivial infections encourages the selection of resistant organisms. Irrational use may expose treated animals to unnecessary risks.

Successful antimicrobial therapy relies on administering sufficient doses to effectively suppress (bacteriostatic) or kill (bactericidal) pathogens at the site of infection so that the host’s defences can eliminate them. For diseases of unknown cause or attributable to organisms with unpredictable susceptibility, e.g. Gram-negative enteric bacteria, there is no substitute for bacterial culture and identification of the causative agent. A Gram stain can be performed immediately on a direct smear and will direct initial therapy until the laboratory results are obtained.

In the laboratory, the relationship between an antimicrobial drug and a pathogen is described by the minimum inhibitory concentration (MIC), the lowest drug concentration that inhibits bacterial growth. The information listed in a culture and susceptibility report is intended to guide antimicrobial selection but must be interpreted carefully since the testing does not take into account a number of important factors, such as host defences, drug distribution, the infection site environment and the route of drug administration.

For many drugs, the distinction between bactericidal and bacteriostatic is not exact and depends on the pathogen involved and the drug concentration attained in the target tissues. A bactericidal drug (aminoglycoside, penicillin, cephalosporin, potentiated sulphonamide) is preferable to a bacteriostatic drug (tetracycline, sulphonamide) for neonatal septicaemia, life-threatening conditions and surgical prophylaxis.

Penicillins and cephalosporins are bactericidal but exhibit so-called time-dependent (concentration-independent) bacterial killing. Plasma concentrations of these agents should exceed the MIC of the pathogen for 50-80% of the inter-dosing interval, and further increases in dose rate will not increase the bactericidal activity.

Combinations of agents are appropriate in only a few situations