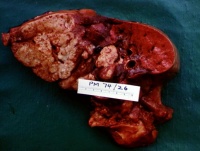 Rhodococcus equi is a Gram-positive aerobic, intracellular, saprophyte found worldwide in the soil and in the intestinal tract of animals. It replicates at warm temperatures in soils contaminated by faeces of herbivores and is an opportunistic respiratory pathogen of foals under 6 months causing suppurative bronchoneumonia.

Pastures can become heavily contaminated leading to outbreaks of the disease. The organism can be present in the faeces of adult horses and also healthy foals, without causing clinical disease. Transmission can be via inhalation of dust contaminated with R. equi.

Bronchoneumonia and lung abscessation in foals less than 4 months old. Acute disease in 1 month-old foals with signs such as acute fever, anorexia, bronchopneumonia. In older foals, 2 - 4 months the disease is more insidious with signs such as coughing, dyspnoea, weight loss, exercise intolerance, loud, moist rattles on lung auscultation. There is occasionally diarrhoea seen, due to granulomatous ulcerative enterocolitis, mesenteric lymphadenitis and peritonitis in some foals following ingestion of contaminated sputum.

Foals over 6 months are refractory to pulmonary infection, but superficial abscesses may occur.

History of the disease on the farm, age of foals and clinical signs are used to make a presumptive diagnosis. Auscultation and radiography of thorax confirms pulmonary disease. Sonography of the lung shows small abscesses close to the pleura in a very early stage, even before clinical signs can be seen. White blood cell cound (WBC) is rising in an early stage, too.

Samples of tracheal aspirates and pus from lesions need to be taken and cultured aerobically on blood and MacConkey agar for 24-48 hours. Characteristic salmon-pink mucoid colonies grow, due to capsule and pigment production.

PCR from the tracheobronchial mucus is a safe method to confirm diagnosis.

Starting the treatment in an early stage is important for the success! Affected farms should be screened regularly. Clinical examination, WBC and sonography of the lung are effective tools to catch the disease early.

Rehydration therapy if diarrhoea is involved may be needed. Bronchodilators and expectorants should be used supportively.

Sonography of the lung and clinical examination are the best control for treatment´s success. Control measures include preventing build-up of bacteria in environment by removing manure from pastures often and rotating foals and mares onto clean pastures regularly. Dusty conditions in paddocks should be avoided. In sickly looking foals, hyperimmune serum from the dam may be given to the foal in the first month of life.

There are many dissertations from Hannover University (summary in English):