From WikiVet English
Peritonitis
Jump to navigation Jump to search

Peritonitis refers to inflammation of the peritoneal cavity and it may occur in any of the domestic species. Peritonitis represents a considerable therapeutic challenge in any species and frequently carries a very poor prognosis.

Peritonitis may be classified in a number of ways depending on its cause, the nature of the inflammatory exudate formed, the extent of the disease and the chronicity with which it develops.

Different pathological processes result in the formation of different types of inflammatory exudate depending on the degree to which the peritoneal vasculature is damaged and on the types of leucocyte which migrate to the site of the inflammation. The following types of peritonitis are recognised based on the nature of the exudate:

Peritonitis may occur acutely or it may be a chronic process that reaches an advanced stage before it is diagnosed. In cases of acute peritonitis, there is likely to be an increased amount of fluid in the peritoneal cavity and roughening of serosal surface of the abdominal organs and parietal peritoneum due to the presence of fibrin. Cases of chronic peritonitis often involve fibrous adhesions between any of the abdominal organs and the omentum, mesentery or peritoneum.

Inflammation of the peritoneum may occur as a primary disease but it is more likely to be secondary to another pathological process. The inflammation may be septic if it involves a bacterial infection or it may be non-septic.

Substances such as barium contrast agent may cause inflammation if they are allowed to leak into peritoneal cavity. Barium may cause a potentially fatal haemorrhagic peritonitis. Glove powder from surgical gloves may incite a granulomatous peritonitis.

Chemical peritonitis occurs when irritant fluids effuse or leak into the peritoneal cavity. Rupture of the biliary tract results in the leakage of bile into the abdomen. Initially, this causes few clinical signs but over time, it irritates the visceral and parietal peritoneum and causes them to become inflamed. If the biliary tract is infected at the time of rupture, a septic peritonitis may develop. The parietal peritoneum and abdominal organs are typically stained green by the presence of bile. An image of bile peritonitis in a cat is available here.

Rupture of the urinary tract causes urine to spill into the abdomen producing a uroabdomen. As with bile, the urine irritates the peritoneum after 48-72 hours and causes inflammation but it is likely that the animal will show marked clinical signs of stranguria, anuria and depression before this time. If the urinary tract is infected at the time of rupture, a septic peritonitis may develop.

In small animals with pancreatitis, pancreatic enzymes may leak into the abdomen together with discharge from the necrotic peripancreatic fat. This usually results in a local peritonitis in the cranial abdomen and the animal may show signs of pain when this area is palpated.

Chyle may cause a mild granulomatous serositis if it accumulates in the abdomen. 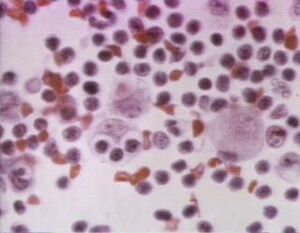 The main routes by which bacteria enter the peritoneal cavity are from the gastro-intestinal (GI) tract and from externally. Penetrating wounds to the abdomen and the introduction of foreign bodies are likely to introduce bacteria.

GI bacteria may enter the peritoneal cavity after perforation or rupture of the intestine. This may occur due to erosion of the intestinal wall by ulcers or neoplasia or due to rupture after a loop of intestine is strangulated. Rectal tears of the higher grades in horses may also lead to the introduction of bacteria.

Rupture of other infected tracts (including the urinary tract, reproductive tract and biliary tract) may also cause septic peritonitis.

In immature animals in whom the umbilicus has not fully closed, peritonitis may occur due to ascending infections through this structure. Systemic infections may also enter the peritoneal cavity and cause septic peritonitis. 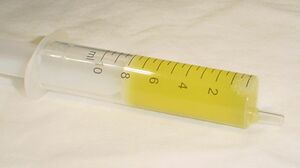 The 'wet' or effusive form of feline infectious peritonitis is caused by pyogranulomatous inflammation of the venules of the omentum and aprietal and visceral peritoneum. This vasculitis results in the effusion of sero-fibrinous fluid with a high protein and immunoglobulin content and tags of fibrin attach to the peritoneum and abdominal organs.

The migration of large stronglyes (particularly Strongylus vulgaris in the abdominal vasculature of horses may result in intestinal infarction and septic peritonitis. Severe signs of colic are usually the first sign of this syndrome which typically occurs in late winter/early spring.

The migration of the larvae of the liver fluke Fasciola hepatica may produce lesions around the liver that subsequently become inflamed producng a localised peritonitis. Sheep and cattle are most commonly infected by this trematode.

Initially, the GI tract of affected animals is hypermotile but this quickly progresses to hypomotility and paralytic ileus. This hypomotility may be appreciable on auscultation in large animals in which borborygmi should normally be audible.

Peritonitis in the Domestic Species

Diffuse acute septic peritonitis (as caused by rectal tears or GI rupture) is frequently fatal in horses and affected animals are often euthanased when after a diagnosis is made. Septic peritonitis occurs most commonly due to rupture of the strangulated loops of small intestine or rupture of a stomach distended by fluid refluxed from the duodenum. For an image of acute fibrinous peritonitis in a horse, see[1].

Haemorrhage as a consequence of castration may result in acute non-septic peritonitis.

Peritonitis may also occur secondary to parasitic intestinal infarctions caused by Strongylus vulgaris but this is now rare in the UK due to widespread anthelmintic treatment.

Peritonitis may occur due to traumatic or iatrogenic perforation of an abdominal organ, usually the reticulum or uterus. This produces an acute diffuse fibrinopurulent peritonitis or, in some cases, the inflammation may be confined to a smaller area of the peritoneal cavity by the exuberant formation of fibrous tissue.

Traumatic reticuloperitonitis occurs when an ingested foreign body becomes lodged in the reticulum and subsequently perforates this organ. This usually produces a localised peritonitis between the reticulum and diaphragm but, in severe cases and in cows around parturition, generalised inflammation may develop. The foreign body may penetrate cranially through the diaphragm and into the pericardial sac. Potential sequelae include acute haemorrhage due to penetration of the left gastro-epiploic artery and vagal indigestion.

Other less common causes of peritonitis in cattle include:

Fibrinopurulent peritonitis may occur in postpartum ewes that develop septic metritis due uterine contamination at parturition or retention of a lamb or a portion of the placenta.

Serofibrinous peritonitis may occur in diseases caused by Mycoplasma spp.

Peritonitis may also occur after penetration of the intestines by larvae of Oesophagostomum columbianum.

Acute fibrinous peritonintis may be caused by infection with Mycoplasma mycoides.