From WikiVet English
Pancreatitis
Jump to navigation Jump to search 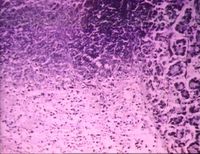 Pancreatitis occurs following activation of digestive enzymes within the pancreas leading to autodigestion of the gland. Can be referred to as acute or chronic pancreatitis.

Acute pancreatitis is rapid onset inflammation of the pancreas with little or no pathological changes occurring post recovery. This may completely resolve or 'wax and wane' in the future.

The specific cause is usually idiopathic but several risk factors exist including:

A Nutritional basis which refers to obesity, low protein and high fat diets, feeding of ethionine and hypertriglyceridaemia.

This term is often interchangeable with acute pancreatic necrosis or acute pancreatitis. The condition can be mild or severe, non-fatal or fatal. It usually occurs as a sudden onset condition, often after ingestion of a meal rich in fat, but this depends on what species the condition occurs.

The Islets of Langerhans may become involved thus causing the signs if insulin insufficiency. Pancreatitis may be initiated by trauma which initiates the leakage of enzymes. It can also present as recurrent acute pancreatitis - repeated inflammation with minimal permanent pathology. In the disease process, proteolytic degradation of pancreatic parenchyma, vascular damage and haemorrhage occur as well as necrosis of fat by lipolytic enzymes in the pancreas and surrounding omentum. These changes are concentrated at the periphery of lobules and infiltration by leukocytes indicates inflammation. In mild cases oedema of the interstitial tissue occurs. In more severe cases the pancreas is haemorrhagic and oedematous with greyish white areas of necrosis and this may be interspersed with normal parenchyma. The peritoneal cavity may contain blood-stained fluid sometimes with droplets of fat. Due to these large amounts of necrotic debris, infection by microorganisms from the GIT is likely, causing abscesses.

In pigs suppuration of the pancreas can occasionally arise as an extension from nearby infection, eg. peritonitis and perforated oesophageal ulcers.

Chronic pancreatitis often occurs following ongoing inflammation with progression to irreversible damage and impaired function. There is usually fibrosis and reduction in acinar mass. This condition can occur in all species as a consequence of obstruction of the pancreatic ducts, vitamin A deficiency may predispose to this. The condition is most common in the dog, but also in cat, horse and cattle. The islets of Langerhans tend to be preserved. If chronic pancreatitis persisits it can lead to Exocrine Pancreatic Insufficiency (EPI). In cats, chronic pancreatitis can also lead to Diabetes Mellitus developing.

Necrosis of exocrine pancreatic cells followed by fibrosis can be caused by zinc toxicosis. Focal pancreatitis may occur during Foot and Mouth disease resulting in diabetes mellitus during recovery.

Chronic pancreatitis can occur sporadically and is usually a consequence of parasitic migration or from ascending bacterial infection of pancreatic ducts. It can occur alongside chronic eosinophilic gastroenteritis and is usually clinically silent. Organ tends to be replaced by scar tissue.

Focal pancreatitis may occur during Foot and Mouth disease resulting in diabetes mellitus during recovery.

Cowart, R.P. and Casteel, S.W. (2001) An Outline of Swine diseases: a handbook, Wiley-Blackwell