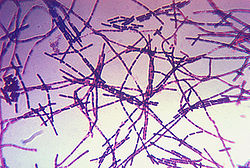 Bacillus anthracis is a species of Bacillus bacteria. B.anthracis is a saprophyte in soil. Its endospore formation allows persistence and spread as they survive decades in the soil. Infection usually occurs by ingestion of spores and penetration through damaged mucosa. Outbreaks occur in herbivore's grazing pastures contaminated by spores from buried carcases.

Spores of the bacteria germinate at the site of entry and spread via lymphatics to the bloodstream, where they multiply and produce toxin. The extracellular toxin (holotoxin) is composed of oedema factor, protective antigen and lethal factor.

Oedema factor is an adenylate cyclase which increases intracellular cAMP concetrations, causing fluid accumulation and damaging neutrophils. Lethal factor causes release of cytokines from macrophages and protective antigen binds to the cell receptor to allow action of the other factors. The toxin kills phagocytes, increases capillary permeability and interferes with the clotting cascade.

They have a capsule composed of a homopolymer of D-isomer of glutamic acid. It allows survival in the body by resisting phagocytosis. The capsule and toxin (encoded by separate plasmids) are required for virulence. The capsule stains mauve with polychrome methylene blue in the MacFadyean's reaction. This can be used to identify anthrax in blood samples. Bacilli appear as chains of dark blue, square-ended rods surounded with the capsule.

Bacillus anthracis causes tissues to darken and swell due to oedema and necrosis. It causes capillary thrombosis, the leakage of fluid through damaged capillary endothelium. Systemic shock from circulatory collapse, haemorrhagic disease and oedema lead to death of the animal. It causes severe systemic disease that can result in enteritis and peritonitis in pigs.