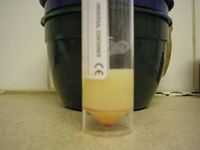 Chylous effusion
(Courtesy of B. Stanikova)

Chylous effusions are predominantly composed of chyle, the lymphatic fluid that flows through the lacteals of the small intestine and the thoracic duct in the chest. Effusions occur when the normal flow of lymph is disrupted, either by alterations in the pressure gradient between the lymphatic and systemic venous systems or by physical disruption of the lymphatic vessels. Chyle resembles milk and it is composed chiefly of fat globules (chylomicrons) with a high lymphocytic cellularity. The vast majority of chylous effusions occur in the chest (producing chylothorax) but chylous ascites may occur. The major causes of chylous effusions are:

Effusions may occur in the thorax and, occasionally, the abdomen. This causes:

Effusions are easily diagnosed by ultrasonography and this modality may also be used to guide fine needle aspiration to obtain a sample of the fluid. Effusions also produce a distinctive pattern on plain radiographs:

Definitive diagnosis of the type of effusion relies on collection of a sample and subsequent cytological analysis. A refractometer is frequently used to measure the specific gravity of the fluid. The following findings would be expected for a chylous effusion:

Pseudochyle is a type of fluid which has the same milky appearance as chyle but is actually composed of cellular debris, cholesterol micelles and lecithin globulin complexes. Pseudochyle may represent an inflammatory or neoplastic process and, although rare in animals, it may be associated with Mycobacterium infection. True chyle may be identified in the following ways:

Effusions should be drained if they are causing clinical signs (of dyspnoea with chylothorax) but otherwise should be left as drainage will deplete body protein reserves. The thoracic duct can be ligated to prevent the development of chylothorax but this is not always successful and it may be difficult to identify the vessel.

A low fat diet will reduce the production of chyle as fewer fat globules are absorbed in the small intestine and lymphatic flow is reduced. This is the same rationale for the use of a low fat diet in lymphangiectasia.

Rutin is a benzopyrone drug used for the treatment of lymphoedema in humans and it may have value in the management of chylothorax, if it can be obtained. It is thought to stimulate the phagocytosis of chylomicrons by tissue macrophages.

If a tumour is found to be causing the clinical signs, resection may be attempted.