From WikiVet English
Lymphangiectasia
Jump to navigation Jump to search

Lymphangiectasia is a disease of the lymphatic vessels that results in the leakage of protein-rich lymph. The term is usually taken to mean intestinal lymphangiectasia (in which lymph is lost into the intestinal lumen, producing a protein-losing enteropathy(PLE) and severe lipid malabsorption) but thoracic and generalised lymphangiectasia have been reported.

The disease is relatively common in dogs but rare in cats. Yorkshire terriers, Rottweilers and Norwegian Lundehunds are predisposed to the development of disease.

Clinical signs are related to the loss of lymph and the resultant protein-losing enteropathy and fat malabsorption. The following signs are therefore common:

Several parameters may be altered on haematological or biochemical analysis of blood samples.

Lymphopaenia occurs as lymphocytes are the major type of cell present in lymph and they are therefore lost into the intestinal lumen in large numbers. If an inflammatory process (such as lipogranulomatous lymphangitis) has developed, there may be a monocytosis or neutrophilia.

Changes on biochemistry mainly reflect the loss of lymph into the intestine:

Further tests may be used to confirm the presence of protein-losing enteropathy, including measurement of faecal alpha-1 protease inhibitor concentration and faecal 51-Chromium albumin concentration after intra-venous injection.

Ultrasound scans may reveal the presence of effusions (pleural fluid or ascites) and may be used to rule out other causes of PLE. The mucosa of affected intestinal loops may appear to be thickened and may also appear to have 'tiger stripes', although the latter finding is an unreliable indicator of lymphangiectasia. 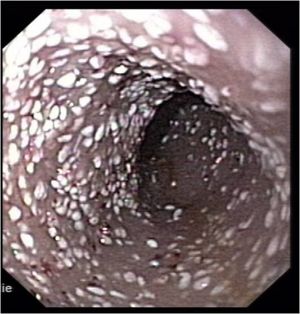 Endoscopy of a dog with lymphangiectasia, showing protrusion of lipid droplets into the intestinal lumen.
Copyright Karin Allenspach 2007 RVC

Grossly, multiple white lipid droplets can be seen to protrude from prominent mucosal blebs in the intestine (see image). The mucosa is frequently oedematous.

Preferably, a full thickness intestinal biopsy should be taken to achieve a definitive diagnosis. Care should be taken as hypoproteinaemic animals are at much greater risk of dehiscence at the biopsy sites, potentially leading to an acute septic peritonitis. On histological examination of the biopsy sample, accumulation of lipid-laden macrophages may be detected together with a granulomatous response around distended lymphatics.

It is essential to distinguish a true lymphangiectasia from secondary lacteal dilation that occurs with Inflammatory Bowel Disease (IBD). In the case of IBD, an inflammatory infiltrate will be seen in the lamina propria but the degree of infiltration may be underestimated if oedema is present.

If the lymphangiectasia is secondary to another disease, the underlying cause should be treated. Otherwise, the following elements should be considered in designing a treatment plan.

The diet should have a low fat content to reduce the production of lymph but should have a high calorie content to allow the animal to regain weight. The fat soluble vitamins (K, E, D and A) should be supplemented and additional calcium should be added if hypocalcaemia is documented.

Immunosuppressive agents are a key element in the treatment of lymphangiectasia. Corticosteroids such as prednisolone are used most commonly for this pupose at an immunosuppressive dose (of 1-2 mg/kg/day in dogs). These drugs are likely to be of most benefit in those animals that have evidence of inflammatory pathology, such as lipogranulomatous lymphangitis and inflammatory infiltration of the lamina propria. If further immunosuppression is considered necessary or if adverse effects occur with corticosteroid therapy, azathioprine or ciclosporin could also be used.

Metronidazole or tylosin may be used to control any secondary SIBO. Antibiotics are thought to have effects on both the intestinal immune system and the normal enteric flora.

Short term treatment with plasma or colloids can be instituted in severely hypoproteinaemic animals that have begun to develop clinical signs. Diuretics such as frusemide and spironolactone may also be used to manage effusions.

The long-term prognosis is guarded as, although animals may respond to medical therapy initially, they frequently relapse and develop clinical signs associated with hypoproteinaemia.