From WikiVet English
(Redirected from BSE) 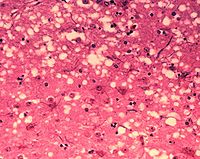 This micrograph of brain tissue reveals the cytoarchitectural histopathologic changes found in bovine spongiform encephalopathy. The presence of vacuoles, i.e. microscopic “holes” in the grey matter, gives the brain of BSE-affected cows a sponge-like appearance when tissue sections are examined in the lab.

BSE was first recognised in the United Kingdom in 1986 after a huge epidemic in the UK involving over 100,000 diseased cattle. With the exception of France and Portugal, the number of infected animals in other countries has remained low. The disease is now worldwide and has occurred in Europe, Asia, Middle East and North America.

Bovine spongiform encephalopathy (BSE) is a progressive, fatal and non-febrile neurological disorder affecting adult cattle. BSE belongs to a group of diseases called transmissible spongiform encephalopathy (TSE), also referred to as prion diseases. It can be caused by an infectious or genetic disorder. It occurs when a natural prion PrP changes in conformation into the pathogenic isoform PrPsc and causes the spongy degeneration of the brain. In genetic prion diseases, this may be caused by a somatic mutation in the PrPc gene or in infectious BSE, exposure to foreign PrPsc may start this conformation change, leading to a progressive cascade of conformational change of natural PrPc into PrPsc [1].

Cattle became exposed to the abnormal prions through the feeding of ruminant-derived protein within feedstuffs such as meat-and-bone meal (MBM). It is thought that changes in the rendering process of the MBM increased the survival of scrapie-like materials (prions) from infected sheep carcasses and the recycling of infected bovine materials lead to the spread of BSE through infected MBM.

There is no evidence to support the horizontal transmission of BSE under natural circumstances but there is evidence supporting vertical transmission [2], [3], [4], [5], [6]. BSE is notifiable and unlike scrapie is considered a zoonosis.

The disease has a very long incubation period (average 4 – 5 years ) and mainly affects animals aged 4-6 years old. It causes progressive neurological signs which can last several months and results in mortality. There is no breed or sex predilection, however the incidence of BSE in dairy cows is much greater than beef cows, possibly correlated to the greater use of concentrate rations containing MBM.

Spongiform encephalopathies also occurred in new species such as the greater kudu, nyala, Arabian onynx, Scimitar horned oryx, eland, gemsbok, bison, ankole, tiger, cheetah, ocelot, puma, and domestic cats, during the 1990s [7], [8] , [1] and in 2005 a goat was confirmed positive for BSE in France. To date there is no scientific evidence that experimental oral BSE challenge of pigs and poultry with brain material from cattle with BSE results in disease. 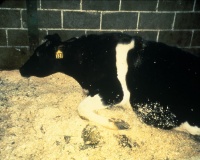 The first sign is usually separation from the herd and reluctance to move into the milking parlour and the cows may respond by with vigorous kicking.

BSE-affected cattle show progressive neurological and behavioural changes, abnormalities of posture and movement, recumbency, changes in sensation and temperament and increased aggression. Nervousness, tremors, falling, hyperaesthesia to sound and touch and progressive weakness and hind-limb ataxia and agalactia or decreased milk yield are the most prominent clinical signs.

A preliminary diagnosis can be made on observation of the above clinical signs. The disease is characterized by accumulation of prion protein in the medulla oblongata (obex) region of the brain, as well as other tissues (lymph nodes, spleen, tonsils, etc) and can be confirmed on post mortem by the presence of the following histological changes in the brain: bilateral symmetrical vacuolation and immunohistochemical demonstration of the accumulation of the disease specific PrPsc in the grey matter of the brain, gliosis, hypertrophy of astrocytes, neuronal degeneration and cerebral amyloidosis.

The absence of detectable immune responses in BSE precludes any serological test for the detection of antibodies.

For surveillance, a number of rapid tests on brain samples have been developed and approved by the European Union. These include the Western Blot test (detection of PrPres), Luminescence immunoassay (detection of disease specific prion proteins), and Chemiluminescent ELISA test.

There is currently no vaccine or treatment protocol for this disease.

BSE is extremely difficult to control due to its long incubation period and the fact that the altered prions are extremely resistant to heat and chemicals. Stringent preventive measures are in place to stop the spread of the disease, prevent cattle and human exposure and to eradicate BSE from the animal population.

The most important of these measures has been the feed ban issued in 1988, prohibiting the feeding of ruminant derived meat and bone meal (MBM) to ruminants [9] and the adoption of the ban by the EU in 1994.

For countries that are BSE free, preventative measures are ruminant to ruminant feed ban, import controls and surveillance.

To reduce the risk to humans developing variant Creutzfeldt-Jakob Disease (vCJD) all visible nervous and lymphatic tissue that are classified as specified risk materials (SRM) are removed during the processing of cattle as well as the removal of any suspect animals from the human food chain.