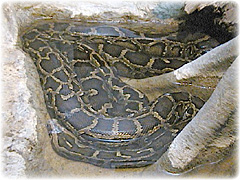 The Burmese python (Python molurus) is a python (family Boidae). Their life span may be 10-15 years.

Burmese pythons have an intricate pattern of markings of irregular brown blotches on a yellow background. The Burmese python is widely bred in captivity and comes in a number of mutant forms including albino. They can grow rapidly, attaining 2 metres in length in their first year and perhaps reaching 8 metres.