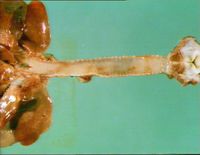 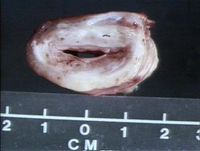 Tracheal collapse refers to the condition of excessive collapsibility of the trachea.

There is degeneration of tracheal ring cartilage and replacement with fibrous tissue which results in reduced tracheal ring stiffness which impinges on the tracheal lumen. The trachea becomes flattened dorsoventrally and there is reduced airway diameter. This diameter is further reduced by the flaccid dorsal tracheal membrane which sags into the lumen.

The dorsal membrane can also become thickened due to repeated low grade trauma and chronic tracheitis.

The aetiology is unclear but tracheal collapse has been associated with other conditions such as tracheal trauma, intra- and extra-luminal masses and tracheal hypoplasia.

The condition occurs most commonly in toy and miniature breeds of dogs such as the Yorkshire Terrier and is rare in cats. The usually age of onset is between 6 and 8 years of age. Most affected animals are obese.

It also occurs in miniature ponies such as the Shetland Pony and cattle and goats.

Dogs are usually presented for a chronic cough, which is often dry and non-productive. It is often described as 'goose-honking'.

The signs may be mild initially but the cough can progress to severe, paroxysmal episodes.

These episodes are often precipitated by episodes of excitement or tracheal irritation such as pulling on the lead. There may also be exercise intolerance, and a history of gagging after eating or drinking.

A harsh cough can usually be induced with gentle tracheal palpation.

Radiography is commonly used to diagnose the condition. Lateral radiographs of the cervical and thoracic regions may reveal dorsoventral flattening of the trachea. However false-negative films occur quite frequently due to the dynamic nature of the collapse.

Inspiratory and expiratory radiographs should be taken in order to maximise the chances of visualising the condition.

Fluoroscopy enables continuous visualisation through all the phases of respiration and is an effective method of diagnosis.

Echocardiography may be indicated if a heart murmur is also present, to rule out any heart disease.

Treatment in horses is usually conservative, and small ponies do well if minimal exercise is demanded of them.

The following information is for small animal cases.

Immediate therapy if the animal presents with cyanosis and collapse include: oxygen supplementation, sedation with acepromazine and a bronchodilator such as aminophylline.

There are two methods of long-term therapy: conservative medical management and surgery.

This is symptomatic and palliative. It is usually effective in mild cases and grades I and II. Medical therapy should always be attempted before surgery is considered.

Antitussive medication: to break the cycle of cough-induced airway irritation. Butorphanol has minimal sedative effects and is very effective, hydrocodone is also used.

These must be used with care when there is concurrent small airway disease, as there is a risk of decreasing mucus and debris clearance if the cough is productive.

Bronchodilators: these are the mainstay of medical therapy. Methylxanthines such as theophylline and beta2-agonists such as albuterol and terbutaline are the common drugs used. Methylxanthines also enhance mucociliary clearance, increase respiratory efficacy and have antiinflammatory effects.

Glucocorticoids: their use is controversial. There is usually an improvement in clinical signs, but continued usage predisposes to respiratory infections and hyperadrenocorticism. They are useful when there is a severe acute exacerbation of the condition and airway oedema and inflammation are severe.

Antibiotics: can be given based on the results of tracheal wash cultures. Routine use of antibiotics is not encouraged.

Sedation: may be required during times of excitement or stress, as clinical signs may be exacerbated.

Surgery is usually the treatment of choice in animals with a Grade III or IV collapse, when medical management has not been satisfactory.

Extraluminal prosthesis techniques were the most widely used surgical techniques until recently. They are preferred in younger animals.

Ring and spiral prosthetics have been used. The internal diameter of the ring is sized according to the tracheal ring diameter. The prosthesis is applied taking great care not to interfere with the vascular and nerve supply of the larynx and trachea.

The most important complication is laryngeal paralysis.

Intraluminal stents are useful if the collapse is intrathoracic. They offer the advantage of minimally invasive deployment, short post-operative convalescence, and rapid restoration of airway lumen.

The stents interfere with mucociliary clearance and predispose patients to lower airway infections.