From WikiVet English
Cryptosporidium
Jump to navigation Jump to search

Cryptosporidium parvum - Courtesy of the Laboratory of Parasitology, University of Pennsylvania School of Veterinary Medicine 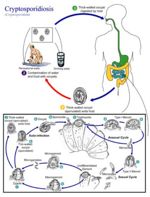 Cryptosporidium is the single genus in the Cryptosporidiidae family and contains at least 13 recognised species. These small protozoan parasites are able to infect a wide range of hosts including mammals, birds, reptiles and fish. These species are the causative agents of cryptosporidiosis, C. parvum is the most common species infecting mammals and man.

Cryptosporidium species are extremely small in size, the oocysts being 4-5μm. They parasitise the epithelial cells lining the alimentary and respiratory tracts of the host. The developmental stages of the parasite are confined to the brush border area of the gut epithelium.

Cryptosporidium mostly has a standard coccidial life cycle with a few exceptions. The oocyte does not contain sporocysts, instead the four sporozoites are free within the oocyst. Also the parasite does not invade the cells of the host, instead it develops in a membrane derived from the microvilli of the gut. The pre patent period of cryptosporidium is 1 week, after which sporulated oocysts are shed in the hosts faeces.

In young calves Crytosporidium infection causes outbreak of severe diarrhoea or scour. Contributes to undifferentiated neonatal calf diarrhoea which is a mixed viral enteritis in calves. Although it can cause severe illness in young animals, many older animals can be asymptomatic carriers of the disease.

Cryptosporidium is a zoonotic disease that can infect humans causing severe vomiting and diarrhoea. This is commonly seen in people who work with animals and do not practice sufficient hygiene and in AIDS and other immunocompromised patients.

Cryptosporidum can be transferred by two different routes;

This involves ingestion of the sporulated oocysts, usually along with the ingestion of a small amount of fecal material. This can be due to grazing on common pasture as infected animals, meaning infections spread rapidly throughout young stock. In the case of zoonoses, this route is usually the result of poor hygiene after being in contact with potentially infected animals and their faeces. Washing and disinfecting hands after contact with young cattle can help prevent zoonotic infection.

Contamination of the water supply can infect large numbers of people using a common water source. The source of this contamination is often difficult to locate.