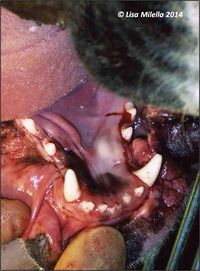 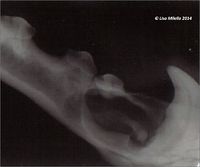 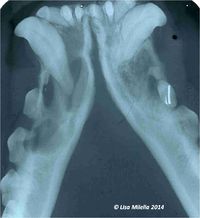 A dentigerous cyst is a developmental odontogenic cyst. The cyst surrounds the crown of an unerupted tooth and is attached to the cemento-enamel junction of the tooth. It is essentially a cystic enlargement of the dental follicle after completion of enamel formation.

The stimulus that initiates cystic change is unknown [1][2]
The cyst develops as a result of fluid accumulation between the crown of the tooth and the retained epithelium. The cyst increases in size due to increased osmolarity as a result of the passage of inflammatory cells and desquamated epithelial cells into the cystic lumen. Influx of fluid along this osmotic gradient thereby creates centrifugal growth of the cyst. In human dentistry, dentigerous cysts frequently affect teeth that erupt late [1][2]. This does not seem to be the case in veterinary dentistry.

During clinical examination, the enclosed tooth is absent from the dental arch and some of the adjacent teeth may show tilting as a result of root resorption. A small swelling may be present at the site of the absent tooth. It is reported that the patient is usually asymptomatic and the condition is only associated with pain if there is a secondary infection. It is suspected though that pain can occur if the cyst enlarges and causes pressure on neurovascular bundles (dentigerous cysts occur more commonly in the mandible and can enlarge and cause pressure on the inferior alveolar nerve). This is anecdotally evidenced by the cessation of tooth-grinding post-operatively.

Radiographic features include a well-defined, usually unilocular, area of radiolucency with a sclerotic margin. The area contains the radiodense crown of the unerupted tooth.

The cyst is surrounded by a thick fibrous wall containing fibroblasts and abundant ground substance. The epithelium is in continuity with the reduced enamel epithelium at the cemento-enamel junction and consists of flattened, darkly-staining, stratified squamous epithelium, usually 2-3 cell layers thick.

Treatment is usually curative if careful enucleation of the cyst together with the unerupted tooth is performed.