From WikiVet English
Dermatophytosis
Jump to navigation Jump to search 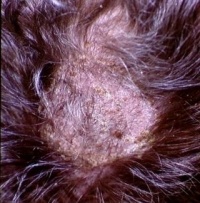 Ringworm in a dog (Courtesy of Bristol BioMed Image Archive)

Dermatophytes are pigmented, saprophytic organisms called Phaeohyphomycetes and were previously called 'Fungi Imperfecti'. The two main species of veterinary interest are Microsporum and Trichophton and these are found worldwide.

They are usually secondary invaders and are able to penetrate all layers of skin, but are generally restricted to the keratin layer and its appendages. Therefore the condition is most often seen in subcuticular or cutaneous sites. A lack of tolerance to body temperature and antifungal activity in serum and body fluids prevent the fungi invading subcutaneously. Secondary invasion by Staphylococcus aureus and Staphylococcus intermedius are common and cause pustules in the hair follicles. Epidermal hyperplasia then follows with inflammation.

Microsporum canis is the most common dermatophyte to infect small animals and will be the cause of 90% of feline infections and 60% of canine infections. Trichophyton mentagrophytes affects around 30% of dogs, especially Terrier breeds. Trichophyton verrucosum causes most cases in cattle and sheep and Trichophyton equinum is the commonest cause in horses. About 25% of wild hedgehogs are carriers of Trichophyton erinacei which can also infect dogs and humans.

The condition is common in many species, with certain strains affecting certain species more commonly. Hot, humid environments predispose to infection and young animals tend to be more commonly affected. The condition is more common in housed animals, rather than animals turned out to pasture and the highest incidence of the disease occurs during the winter months. It may resolve spontaneously in the spring and summer.

There will be circular or irregular lesions (dependent on infectant organism) and these may coalesce. Scaly and crusty patches and alopecia will be seen in these areas due to broken hair shafts and hairs lost from inflammed regions of he skin. Follicular papules and pustules will also be present. There will be a peripheral red ring (ringworm) due to dead fungi in areas of inflammation at centre of lesions and viable fungi peripherally. There is usually a varying degree of pruritus.

Clinical signs are characteristic of the disease. Wood's Lamp can be used to shine UV light onto the lesion and it will fluoresce in 50% of cases (if Microsporum fungi are present). Therefore it is a good diagnostic tool in small animals but is not incredibly reliable. If there is no fluoresence, it does not mean there are no dermatophytes or no Microsporum.

Samples can be taken and examined in 10-20% KOH for the presence of hyphae or arthrospores. Lactophenol Cotton Blue enhances visualisation. One may see, septate hyphae or spores in the stratum corneum, keratin layers and in hair follicles. Perifolliculitis, folliculitis or furunculosis, epidermal hyperplasia and intracorneal microabscesses may also be seen.

Sabouraud's Dextrose agar containing cyclohexamide and chloramphenicol can be used to culture the dermatophyte at room temperature for a month.

A biopsy can also be taken and examined histologically. Signs will include epidermal hyperplasia (hyperkeratosis, parakeratosis, acanthosis) and inflammation.

The affected animal should be isolated and precautions should be taken to prevent human infection, such as wearing gloves. Hair should be clipped around the skin lesions.

Griseofulvin is the best method of systemic treatment, however it can be expensive and prolonged oral treatment may be required. Griseofulvin is no longer licensed for small animals but has been used for many years with useful results. The treatment is continued for 2 weeks after clinical and mycological cure. Griseofulvin is teratogenic and contra-indicated in pregnancy. Haematological side effects have been reported, including neutropenia in FIV-positive cats. Owners handling tablets must wear gloves.

Itraconazole is now licensed for cats in the U.K. (Itrafungol, Janssen). The manufacturers suggest 3 cycles of therapy, one week on, one week off, reflecting the lipophilic properties of the drug that leads to its persistence in the stratum corneum. Laboratory infection models of M. canis infection in kittens have shown that griseofulvin and itraconazole have comparable efficacy.

Apply topical therapy. Topical therapy alone is unlikely to shorten the course of disease because the agents do not penetrate into infected hairs. However, it does assist in removal of surface organisms and reduces environmental contamination. Enilconazole (Imaverol) is licensed for use in dogs and should be applied every three days, in conjunction with systemic therapy. Fatal idiosyncratic reactions have been reported in cats treated with enilconazole. A miconazole + chlorhexidine shampoo (Malaseb, VetXX) is helpful in cats and dogs, and is licensed in the former species for use in conjunction with griseofulvin.