The species Gasterophilus is of the family Oestridae, and is more commonly referred to as the 'Bot fly.' It is an obligate parasite found on horses, donkeys, mules, zebras and elephants.

Infection is particularly common in horses, with around 30-60% infected during the winter months.

Within the United Kingdom there are three species of veterinary importance; G. intestinalis which is the most common, and G. nasalis, and G. haemorrhoidalis which are rare.

G. nigricornis and G. inermis are also of veterinary significance, but not currently within the UK. 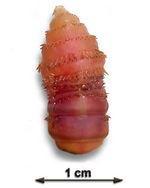 Gasterophilus are medium to large flies at 10-20mm long, and are thought to look similar to drone bumble bees.

They have clear wings with brown patches, and produce creamy-white eggs, around 1-2mm in length

Both G. haemorrhoidalis and G. nasalis have spikes on the ventral surface of the larval segments arranged in two rows. G. intestinalis have mouth parts that are not uniformly curved dorsally and the body spikes present have blunt ended tips.

L1 are extremely small and motile, and begin development in the mouth, tongue and gums of the host. The development of L1 into L2 occurs on the pharynx. L2 then attaches to the base of the tongue and slowly migrates to the stomach.

The larvae then remain and develop within the stomach for around 10-12 months. They mature in the following spring or early summer (generally between May and September), detach from their surface and are passed out in the host faeces. G. haemorrhoidalis also attaches to the rectal mucosa before being passed out. 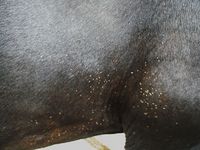 The larvae then penetrate the soil, where they transform into pupae and the flies hatch 30 to 40 days later.

They are only found on pasture, as they do not survive well on stable bedding. The pupae are known to be sensitive to frost, moisture and flooding, so the environmental conditions present play a significant role in the success of the parasite.