Immunological tolerance occurs when there is unresponsiveness towards particular antigens, so any further immune responses are prevented or suppressed. Tolerance is required to prevent:

During T cell development within the thymus, genes encoding the T cell receptors are rearranged, resulting in adult cells that are able to recognise antigen fragments displayed by the host MHC molecule. Some receptors however will be self-reactive, i.e. they bind strongly to antigens expressed by the host's own tissues (autoantigens), inducing immune reactions that could be damaging to the host (autoimmune diseases); they must be deleted or suppressed.

Tolerance at a central level takes place within the thymus, and induces both positive and negative selections:

It is inevitable that some self-reactive T cells will evade the thymic selection process and enter the peripheral circulation, because some self-antigens are not expressed in the thymus, and others will not show sufficient affinity to MHC to form the MHC: self-peptide complex required for negative selection in the thymus. Conversely some T cell receptors will not have enough affinity for their respective self-antigen to induce apoptosis. Peripheral tolerance describes unresponsiveness towards self-antigen which is developed outside the primary lymphoid organs. There are four ways this may be achieved in T cells:

Cell death; Peripheral deletion of T cells requires the engagement of Fas by Fas ligand. Deficiencies in Fas ligand lead to lymphoproliferative disorders. After activation by an antigen, T cells upregulate expression of Fas ligand - some tissues, such as the testis and retina, constitutively express Fas ligand to protect themselves from activated T cells

Cell death is also induced by TNF via the TNF receptor; CTLA-4 has recently also been implicated in cell death. The subsequent signalling cascade activates proteases, such as IL-1beta Converting Enzyme (ICE), that leads to cell apoptosis.

Immune deviation can be described as one immune response being selectively induced over another potential response - examples include Th2-derived cytokines, such as IL-10, which typically support antibody production, but can also down-regulate macrophage effector functions, such as antigen presentation, thereby suppressing the inflammatory response. Likewise, Th1-derived gamma-IFN can prevent Th0-Th2 differentiation. In the case of self-antigens, autoimmune diseases such as diabetes which are caused by Th1 cells can theoretically be prevented by 'antigen-primed' Th2 cells.

Mucosal tolerance is the systemic unresponsiveness towards antigens administered across mucosal surfaces. The highest antigenic load of the body surfaces occurs in the GI tract, so mucosal tolerance is also sometimes referred to as oral tolerance. When oral tolerance towards food antigens breaks down, inflammatory responses are induced. Gut associated lymphoid tissue is important in the development of oral tolerance: animals that lack Peyer’s patches and mesenteric lymph nodes do not develop oral tolerance. It is thought the liver and spleen may also play a role.

In the GI tract, high doses of antigen can cause anergy or cell death. Low doses can induce a T cell response where the antigen is taken up and presented, inducing a Th2-like cell response which produces cytokines that suppress the Th1 inflammatory response, such as IL-10 and TGF-beta. Although the cellular response is antigen-specific, the cytokines released are not. TGF-beta is known to inhibit the proliferation and function of B-cells, cytotoxic T cells and NK cells. This means tolerance induction to one antigen suppresses an immune response to a second associated antigen - this mechanism has been used to suppress some autoimmune diseases by feeding with an antigen isolated from the affected tissue. This is known as bystander suppression.

A number of cell populations identified during studies on autoimmunity and organ transplantation have shown the capacity to suppress responses to self-antigen and therefore can be utilised to regulate rejection. Although once considered a tentative theory, this form of tolerance is now considered a major mechanism in the protection of host tissue from immune attack. 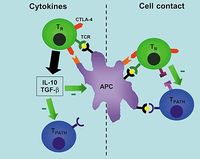 Known as regulatory T cells, CD4+ cells which are antigen-specific are currently thought to develop in the thymus. They usually release inhibitory cytokines, e.g. IL-4, IL-10 and TGF-beta and when their TCRs bind to an antigen, they do not proliferate themselves but suppress the proliferation of other naive T cells that would normally respond to that antigen. The mechanism of suppression is dependent on CTLA-4 on the regulatory T cell binding with B7 on the target T cell and then both cells binding the same antigen.

Regulatory T cells are unique in their use of a transcription repressor known as FoxP3 which is encoded by a gene on the X chromosome; rare deficiencies in FoxP3 are characterised by autoimmunity, primarily towards gut tissue, the thyroid, pancreative beta-cells and the skin. Sufferers are unable to produce regulatory T cells and the only known treatment is a bone marrow transplant from a MHC-identical sibling.