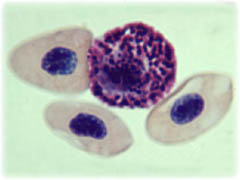 All circulating blood cells are nucleated and it is not unusual to see mitotic figures in the peripheral circulation. The blood cells include erythrocytes, thrombocytes, heterophils, eosinophils, basophils, azurophils, monocytes and lymphocytes.

Reptilian erythrocytes are nucleated and may stay in the peripheral circulation for several years. They are elliptic and have a centrally located, basophilic nucleus. The homogeneous cytoplasm is translucent and light pink-orange. Intraerythrocytic parasites are not uncommon. Erythrocytes are the most abundant cell in peripheral blood and peripheral blood smears. The cell count will vary depending on environmental conditions, nutritional status, sex (M>F) and season. Red cell parameters and indices are an important part of health assessment in reptiles.

Evaluation of leucocytes involves the determination of a total and differential leucocyte count. Manual methods are needed to obtain total leucocyte counts in reptiles because of the presence of nucleated erythrocytes and thrombocytes. The granulocytes are classified as heterophils, eosinophils and basophils on their appearance in peripheral blood films stained with Romanowsky stains.

Thrombocytes are ellipsoidal to fusiform with an elliptical, centrally positioned nucleus. The cytoplasm is frequently colourless to very faint blue and, occasionally, may be vacuolated or foamy. Thrombocytes are often found aggregated, particularly in the outer edges of the smear. Thrombocytes behave similarly to mammalian platelets and are involved in thrombus formation, blood clotting and wound healing. They may also be erythrocyte precursors.

Heterophils are large cells with a round to lobed nucleus and fusiform acidophilic cytoplasmic granules. The size varies between species and often varies in individual blood smears. Heterophil anomalies include cells that have folded edges, are ruptured or degranulated. In some species heterophils are the most common and largest leucocyte. Functions include phagocytosis.

Lymphocytes are mononuclear cells with scant, finely granular, pale blue cytoplasm. They may be large or small. Small lymphocytes are typically round but often have irregular cell outlines. Centrally or eccentrically located nuclei nearly fill the cell. Cells are occasionally seen with vacuolated or foamy cytoplasm. Large lymphocytes are often nearly the same size as azurophils and heterophils. In reptiles there may be more diversity than just T and B cells. In some species lymphocytes are the most common leucocyte and may represent over 80% of the differential in some reptiles. The inability to accurately differentiate between thrombocytes and lymphocytes raises important questions about the differential leukocyte counts in snakes.

Monocytes are generally the largest leucocyte and have a lightly basophilic nucleus that is ovoid and indented (often bean shaped). The cytoplasm usually stains bluish-grey, is finely to moderately granular and often vacuolated. The monocyte range is generally between 0 and 10% of the differential and may increase in chronic infections. Monocytes may not be routinely observed in peripheral blood smears of some species of snakes. They have been reported to appear with severe bacterial infections.

Mature azurophils are similar in size to heterophils and vary in shape from round to monocytoid in appearance. The nuclei are usually eccentric and the cytoplasm is bluish grey with azurophilic granules. Azurophils occur at relatively low numbers in healthy reptiles. They account for 3%–7% of the differential leucocyte count and rarely exceed 10%. There is debate over their nature. Azurophils are increased in bacterial infection and cellular necrosis.

Eosinophils are large granulocytes with spherical, acidophilic, cytoplasmic granules. The number of eosinophils in the leucocyte differential is variable. The nature of eosinophils in squamates is under debate and they may not be observed in the peripheral blood smears of some species of snakes.

Basophils are small spherical granulocytes with intensely staining round basophilic granules. The granules give the contour of the cell a cobblestone appearance and often obscure the nucleus. The nonlobed very dark blue to purple nucleus is slightly eccentric. The number of basophils in a differential leucocyte count is variable and species-dependent but basophils may not be frequently observed in some species of snakes.