Magnesium is a mineral that is the second most common cation (positive ion) in intracellular fluid, after potassium. Its other main site of storage is in bone, where about 50% of the bodys' magnesium is found. Like other minerals, magnesium is a reactive metal that is not found in its free state in nature but combined with other elements to form salts.

Magnesium is an important cofactor in enzyme reactions involved in major metabolic pathways. Examples include those associated with cellular respiration and the transfer of phosphate between adenosine triphosphate (ATP), diphosphate (ADP) and monophosphate (AMP). It is also vital for normal nerve, muscle and heart function and bone mineral formation.

Although large amounts of magnesium are stored in bone, it is not readily mobilised as a reserve for the animal when the supply of dietary magnesium is insufficient. The absorption of magnesium is via an active transport process but passive diffusion from the digestive tract can occur if there is a concentration gradient from the gastrointestinal lumen to the extracellular space. Extracellular magnesium is vital for normal nerve function. A common sign of magnesium deficiency is hyperexcitability caused by a reduction in the resting potential of the nerve membrane, which allows the action potential to be triggered prematurely.

Studies evaluating magnesium deficiency in dogs have had to rely on using purified diets containing artificially low magnesium content, as a naturally-occurring deficiency in magnesium is not achievable.

As with dogs, studies of magnesium requirements in cats have used semi-purified diets in which the concentrations of magnesium and other minerals have been controlled. 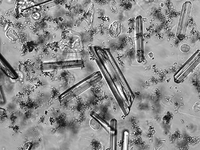 There is no direct information on dietary toxicity of magnesium in dogs. It has been reported that diets containing up to 0.2% DM magnesium (providing 3 to 5 times their requirement)[6] have no adverse effects in adult dogs.

There is ample evidence that increasing dietary magnesium is associated with urinary tract disease in cats, notably the formation of uroliths composed of struvite (i.e. magnesium ammonium phosphate). Dietary magnesium above 0.1% DM had previously been implicated in urolithiasis, however it is thought that this is an indirect effect of magnesium salts, increasing urinary pH which is permissive for struvite stones, rather than a direct effect of magnesium on struvite formation. An increase in urine volume can have some ameliorating effect but acidification of the urine (pH around 6.5) substantially increases the solubility of struvite and is the most effective way of dealing with struvite uroliths[9].

Many ingredients used in dog and cat foods contain reasonable amounts of magnesium. The best sources include meat meals, meat and bone meals, cereal products and soybean meal. There are also a number of magnesium salts used as supplemental sources, including oxide, sulphate, carbonate and chloride. Ground limestone also contains magnesium and if used as a source of calcium will normally also supply sufficient magnesium for nutritional requirements.