The nervous system develops from ectoderm. Some of the ectoderm will also develop into the epidermis. Signalling factors from elsewhere in the embryo determine which parts of the ectoderm become neural tissue or epidermis. In the anterior part of the embryo, the ectoderm forms the neural plate, a flat layer of ectodermal cells lying directly above the node. The morphogenic changes from this neural plate to the nervous system is split into two parts; primary and secondary neuralation. 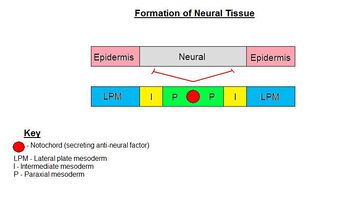 Cells of the ectoderm are directed to develop into either neural ectoderm or epidermis.

How is this choice made?

Formation of the neural ectoderm is the default pathway. Therefore, in order to make epidermis, a signal from the environment must be diverting cells from going down this default pathway. This signal comes from the lateral plate mesoderm (LPM) which directs ectoderm to become epidermis. This signal is the secretory factor BMP-4. The notochord (lying along the midline) secretes an antagonist, Noggin, to the factor of the LPM (BMP-4), so that neural ectoderm is formed above the notochord. Therefore, in lateral regions, ectoderm becomes epidermis and along the midline ectoderm becomes neural ectoderm.

Secondary neuralation occurs posteriorly, from the lumbar level onwards. The neural plate descends ventrally and medially. Cells of the neural plate condense and form a solid rod called the medullary cord. It is then made hollow by cavitations which join up to make a lumen. Tubes formed by primary and secondary neuralation fuse together to make one continuous tube called the neural tube. 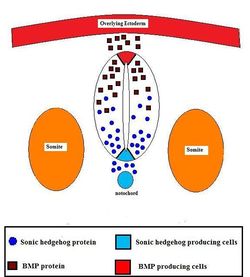 Catcasillas 2010. Shh and BMP gradient in the vertebrate neural tube

The neural tube is one cell thick. The lumen of the neural tube enlarges as cells at the periphery of the lumen divide under mitosis. Cell division is governed by oscillations of the nucleus. When the nucleus reaches the luminal side of cell, the cell undergoes mitosis.

Glia form oligodendrocytes in the CNS, and schwann cells in the PNS. Glial cells surround the axons furthest away form the lumen of the neural tube. Because this part is myelinated, it appears white and is called the marginal layer. Axons closer to the lumen of the neural tube, which the glial cells do not surround appear grey. This layer is called the intermediate layer. The ventricular layer persists, so that the spinal cord develops with these three layers.

Organisation of the Nervous System

Sensory neurones enter the central nervous system (CNS) through the dorsal root. Sensory neurones have their cell bodies in dorsal root ganglia (DRG). DRG are evenly spaced along the spinal cord. Response to the stimulus is mediated by a single motor neurone. Somatic motor neurones have their cell bodies in the CNS. They leave the CNS by the ventral root. Dorsal and ventral roots converge to form spinal nerves. 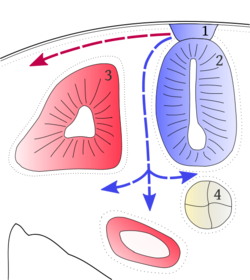 The dorsal neural fold is the site where the neural ectoderm meets the epidermal ectoderm. Signaling at the border between these two tissues leads to the induction of the Neural Crest Cells, which then delaminate (epithelial to mesenchymal transition), migrate to their target sites and differentiate based on the local environmental cues (thus, their fate is plastic). The delamination and migration of neural crest cells occurs during the embryonic stage of neurulation, but is species specific and may occur while the neural tube is still open (mouse and opossum) or closed (chick). In several frog species analyzed, this migration occurs at all phases of neurulation so is not standard for any particular group of vertebrates. Migratory pathways are highly conserved across all vertebrate groups, with streams going toward the frontonasal region and branchial regions in the cranial region (with the regions lateral to the negatively numbered rhombomeres of the hindbrain free of neural crest streams). These streams are directed based on inhibitory signals in the mesenchyme (mesodermal in origin) lateral to the neural tube (rhombomere 3) or are physically blocked, such as lateral to rhombomere 5 with the otic vesicle. Apoptotic signals also play a role in the migration of these cells. The peripheral nervous system (PNS) develops from the neural crest. The cells differentiate once they reach their destination. Other non - neural tissues also develop from the neural crest. Though previously thought that only the cranial neural crest streams can form skeletal (mesodermal types) of derivatives and the trunk only neural types, recent work over the last decade has shown the extreme plasticity in cell fates of these cells along the anterior-posterior axis. Generally:

parasympathetic motor neurones of the gut, which control peristalsis.

The ectoderm thickens in places, with cells changing from cuboidal to columnar. These regions are called placodes. Placodes may be neurogenic or non - neurogenic. Neurogenic placodes are only found in the head, forming only sensory cells. Morphogenic changes produce the following derivatives: