Haemostasis is the normal spontaneous arrest of bleeding from ruptured blood vessels. Normal haemostasis depends on a combination of events: the vascular response, which occurs mainly at capillary and small blood vessel level, the platelet (or thrombocyte) response, which also occurs in capillaries and small vessels, and the blood coagulation response which takes place in the arteries and veins.

Heamostasis is also conventionally classified into:

There are several possible vascular responses, of which one or more may be recruited in normal haemostasis. 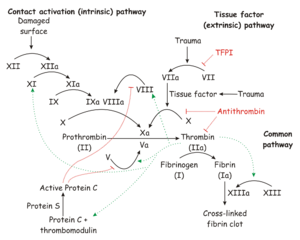 The process of blood coagulation is a cascade system involving a series of conversions of proenzymes to active forms. The amount and speed of conversion increases at each level. The major trigger for the system is contact activation.

There are both intrinsic and extrinsic systems within the clotting cascade.

This refers to tissue thromboplastin and depends on vascular damage as a trigger. It involves platelet activity and operates in a matter of seconds.

The plasma and tissue (intrinsic and extrinsic) components combine to produce thrombin which releases ADP from platelets in order to recruit more platelets to the plug.

Platelet responses are critical in maintaining haemostasis. When platelets are activated, the haemostatic plug is formed. Regulation by the contractile platelet protein thrombosthenin gives clot organisation and fibrin formation; the clot continues to organise and contract over the 3-5 days following formation. Thrombosthenin is present in platelet granules and in the platelet membrane.

A series of events activates platelets to allow them to form the haemostatic plug:

The first stage in platelet activation is an increase in the adhesiveness of platelets which may be initiated by several scenarios:

A friable and leaking plug is formed within 1 minute by this adhesion stage.

More ADP is released, bringing and linking more platelets into the clot.

This is also known as viscous metamorphosis - platelets aggregate to form a tightly packed mosaic which results in compaction of the plug. This gives a good temporary seal to the injured vessel in about 5-30 minutes.

Platelet factors catalyse the conversion of soluble fibrinogen to insoluble fibrin resulting in a progessive infiltration of the initial thrombocyte plug by strands of fibrin, leading to the formation of a composite plug. The fibrin also polymerises, causing coagulation of the blood and clot formation.

After the clot has formed, the platelets actively contract; the contractile protein is thrombosthenin. The fibrin strands shorten, increasing the strength of the clot and bringing the blood vessel walls closer together. The clot is progressively broken down by fibrinolysis and infiltration by new fibroblasts and capillaries occurs. Granulation tissue is formed within 3 days, and permanent repair, either functional or non-functional, occurs in around 1 week.

The blood coagulation process is beneficial, as it is designed to minimise blood loss, however, if the mechanism is prematurely or inadvertently triggered or fibrin deposition becomes excessive, the blood vessels may become obstructed. There is an inhibition system to guard against the cascade being inappropriately triggered, and a mechanism to remove clots once their purpose has been achieved - fibrinolysis. Normally there is a dynamic equilibrium between clotting and fibrinolysis so that the vascular system is guarded from the two principal hazards - haemorrhage and excessive clotting.

A number of factors act on the clot within a few minutes, limiting excessive clot formation:

Coagulants enhance the clotting process - the most commonly encountered coagulants are toxins such as snake venoms. Some venoms have a thrombin-like activity whereas other venoms have a plasma thromboplastin-like effect. Some snakes (Russell's viper, Malayan Pit viper) induce defibrination.

The mechanism of fibrinolysis is designed to prevent the danger of over-production or persistence of fibrin. Plasminogen, and inactive proenzyme in plasma can be activated by a variety of factors to give plasmin, an active protease which breaks down fibrin. In normal haemostasis, small blood clots are usually remodelled or dispersed by fibrinolysis by 1-2 weeks post injury. Where clots are larger, fibrosis followed by recanalisation may occur. Occasionally, there may be enhancement of fibrin destruction through this system, e.g. in severe bacterial infections, for example haemolytic streptococci infections.

Following violent stress or injury with severe pain a general hyperfibrinolytic state is produced after widespread or profound clotting where all the circulating fibrinogen is used up. This can also occur on inactivation of endogenous plasminogen inhibitors, for example with patients given salicylates.

Other systems involved in haemostasis:

Activation of the blood coagulation cascade often activates, or is accompanied by the activation of other systems. This appears to be largely the result of activating Factor XII (the Hageman factor) which simultaneously triggers other body systems:

Usually this system is associated with inflammatory reactions.

The complement system is another cascade system where inactive precursors in plasma are triggered by: