From WikiVet English
Oesophagitis
Jump to navigation Jump to search 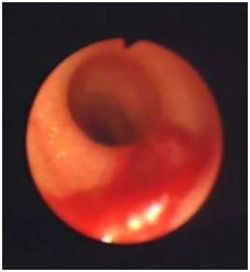 Oesophagitis refers to inflammation of the oesophagus. This usually involves the mucosa but can involve the deeper layers of the submucosa and muscularis and it may follow an acute or chronic course. The oesophagus is usually protected from physical or chemical damage by mucus (produced by simple tubuloacinar glands along its whole length in dogs and in the rostral portion in cats), by peristaltic waves and by the upper and lower oesophageal sphincters which together prevent ingesta or regurgitated material from remaining in contact with the oesophageal wall. Oesophagitis is a serious condition and, if not treated, it may progress to ulceration, rupture, stricture formation or derangement of normal motility (megaoesophagus). The most common causes are:

Any age group can be affected and there is usually a history suggestive of a particular cause, such as a recent general anaesthetic or administration of doxycycline to a cat.

The results of diagnostic tests are usually unremarkable but, as with any inflammatory process, there may be an overall leucocytosis caused by neutrophilia in the acute stage.

Plain radiographs of the chest usually show little inidcation of disease but signs of aspiration pneumonia (an alveolar pattern) may be seen in cranio-ventral lung lobes. Barium contrast studies could be performed and these may show an irregular mucosal surface and narrowing or dilation of the oesophagus due to stricture formation or megaoesophagus, respectively. Barium should not be administered if an oesophageal rupture is suspected as it may escape into the mediastinum and initiate a foreign body reaction.

Endoscopy is the gold standard technique for diagnosis of oeosphagitis but it requires a general anaesthetic (which may be the cause of the problem) and, if a large endoscope is used, there is the potential to cause further traumatic damage. Since medical management of oesophagitis is generally inexpensive, it is rarely advisable to perform this technique in an animal suspected of having active inflammation. If it is performed, the oesophagus may be seen to have an oedematous mucosa that is hyperaemic, ulcerated and actively bleeding, whilst less severe cases may require several mucosal biopsies to diagnose the condition definitively.

Since oesophagitis can lead to serious sequelae, even mild inflammation should be treated aggressively. Any animal which suffers gastro-oesophageal reflux under general anaesthesia should receive metaphylactic treatment as described below. Components of medical management include:

Mild oesophagitis has a good prognosis if treated aggressively but animals which develop ulceration, strictures or aspiration pneumonia have a much more guarded prognosis.