From WikiVet English
Primidone
Jump to navigation Jump to search 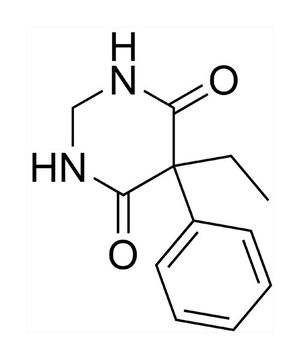 Primidone is a barbiturate derivative that is closely related to phenobarbital. It is a colourless, tasteless substance that forms crystals and is metabolised to the active metabolites phenobarbital and phenylethylmalonamide (PEMA). Primidone is widely used in veterinary medicine for the control of epileptiform seizures, but does not appear to have an advantage over phenobarbital despite its greater potential to cause hepatotoxicity. However, it appears that certain individuals may respond more favourably to primidone than phenobarbital.

Barbituates act by depressing the central nervous system (CNS) by acting at the Gamma Aminobutyric Acid A receptors (GABAa). They mimic and enhance GABA, which is the principle inhibitory neurotransmitter in the CNS. Once bound to the GABAa receptor they reduce the rate of GABA dissociation and thereby increase chloride conductance. This results in hyperpolarisation of the membrane and reduced neuronal excitability, giving a sedative effect. However, as the concentration of barbituate increases, it starts to have a direct effect on the chloride conductance and this is thought to bring about anaesthetic effects. Barbiturates depress the motor centres, conferring anticonvulsant activity, and the sensory centres, inducing anaesthesia.

Some vets use primidone in patients which are refractory to phenobarbital at maximum doses. The efficacy of primidone in this capacity has not been proven, and may simply be due to animals receiving primidone metabolising the drug to greater concentrations of phenobarbital than those generated from administration of straight phenobarbital. In most dogs, however, there is no advantage in using primidone over phenobarbital for seizure control, and there are added side effects. Primidone is also more expensive than phenobarbital, but in some countries may be subject to lesser degrees of control and record keeping.

Cats metabolise primidone to phenobarbital to a lesser extent than dogs, so it follows that the drug may be less effective and more toxic. Primidone is not recommended for use in cats.

Since a large proportion of primidone is converted to phenobarbital, most adverse effects are the same as for this drug. These may include polyphagia, polyuria and polydipsia, which are usually transient and disappear with time. A sedative effect may also be seen. Additional side effects of primidone are nausea, drowsiness, ataxia, nystagmus and, rarely, dermatitis. In man, megaloblastic anaemia may develop from primidone use, and so the drug should be stored securely out of the reach of children.

Primidone is associated with a higher incidence of hepatotoxicity than phenobarbital: hepatic necrosis, fibrosis and cirrhosis have all been associated with chronic use of primidone. One study reported that up to 14 in 20 dogs develop liver toxicity following primidone administration. It is therefore important that liver enzyme assays and tests of liver function are regularly performed to monitor toxicity when primidone is prescribed to veterinary patients.

Manufacturers do not recommend the use of primidone in cats, although studies have suggested that primidone is probably safe in this species.