Reabsorption and Secretion Along the Proximal Tubule - Anatomy & Physiology

Proportion of Filtered Substances Reabsorbed in the Proximal Tubule

Sodium is the most important ion in relation to reabsorption from the proximal tubule. Water and chloride follow sodium passively and many other ions, compounds and molecules are absorbed through co-transporters with sodium. However it is vital that intracellular levels of sodium remain low to favour this reabsorption so it falls to the sodium/potassium ATPase and sodium pump to remove sodium from the cell. Also to a lesser extent active transport of protons (H+). As well as directly sodium linked transport secondary active transport also plays a part however this does tend to be powered by sodium movement. Passive transport also has a role

Transport capacity is well above what is needed for normal plasma concentrations to ensure that adequate absorption occurs and that there is little/no wastage. As sodium, chloride and water are reabsorbed at the same rate, the filtrate concentrations remains the same along the proximal tubule. Only the volume of the filtrate decreases. 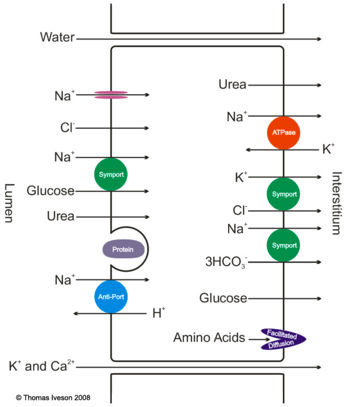 A summary of the reabsorption along the proximal tubule 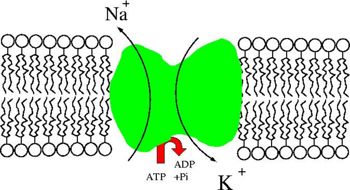 The following ions and compounds are reabsorbed or secreted partly or completely in the proximal tubule:

The majority (70%) of sodium is reabsorbed in the proximal tubule. It is reabsorbed into the cytosol of the epithelial cells either alone by diffusion through ion channels followed by water and chloride or together with another product such as glucose or AA using a co-transporter by secondary active co-transport.

To maintain the concentration gradients and allow the diffusion to continue it is essential that sodium is not allowed to build up within the cell. This is the job of the sodium/potassium ATPase Pump and is an example of primary active transport. This pump removes three sodium ions from the cell and pumps two potassium ions back in. This creates a high concentration of potassium within the cell but this is corrected by potassium ion channels in the basolateral membrane which allow potassium to diffuse back into the interstitium. Because both sodium and potassium are leaving the cell the net effect is that the tubular cells are negatively charged. This creates an electro gradient which further increases sodium uptake from the cells. The combined electrochemical gradient is very large allowing for great amounts of sodium to be reabsorbed.

Sodium is then able to move from the interstial fluid into the blood due to the low hydrostatic pressure within the capillaries and a high protein osmotic pressure. These conditions are caused by the selective filtration of water, ions and glucose but the selective obstruction of proteins and promote the reabsorption of water and the associated dissolved ions within it back into the blood.

50% of filtered urea is reabsorbed in the proximal tubule. However the concentration of urea actually increases thanks to the reabsorption of 70% of the filtered water in the same portion of the nephron. Urea is not able to be reabsorbed from this point until it reaches the lower portion of the collecting duct therefore its concentration further increases with the reabsorption of water.

Glucose is a small molecule and so it is filtered in the same concentrations as are found in plasma which is approximately 5mmol/l. Reabsorption of glucose can only occur in the proximal tubule and occurs regardless of the concentration gradient as it is completed via secondary active transport. It is reabsorbed using a co-transporter with sodium. The realisation of the potential energy produced from sodium moving from an area of high concentration to an area of low concentration is enough energy to transport glucose across the membrane into the epithelial cells. The energy technically comes from the utilisation of ATP by the sodium/potassium ATPase which keeps sodium concentrations within the epithelial cells low this giving the sodium in the lumen a high potential energy.

Glucose is then passively transported out of the epithelial cells across the basolateral membrane.

It is normal that reabsorption is fully completed in the first half of this tubule however as the plasma concentration of glucose increases more of the tubule will be utilised to reabsorb the glucose. Concentrations of double the normal levels are required for glucose to appear in the urine and the concentration where glucose can first be detected is termed the renal threshold for glucose.

At approximately three times the normal levels the kidneys begin to approach the maximum possible reabsorption levels this is termed Tmax and is where the entire length of all the proximal tubules of all the nephrons of the kidney are working at maximum capacity.

Prior to this point the amount of glucose excreted does not increase linearly with the amount filtered. This is because some nephrons have longer proximal tubules than others so although some may be overcome and therefore allowing glucose to be excreted others are managing to fully reabsorb the glucose along their length. This results in what is termed splay. However after Tmax all the nephrons are at and above full capacity and therefore after this point any increase in filtered glucose is demonstrated linearly with that excreted.

The Tmax for a 20Kg dog is approximately 170mg per minute or 220g per 24 hour period. The normal amount of glucose filtered in 24 hours should be 60g.

The Kidneys Role In Glucose Regulation

The kidneys do not really regulate plasma glucose but their main aim is to preserve this valuable nutrient. It is only at very high levels which the kidneys play a role in helping to prevent any further rises in glucose via excretion.

The Secretion of H+ and the Reabsorption of HCO3- 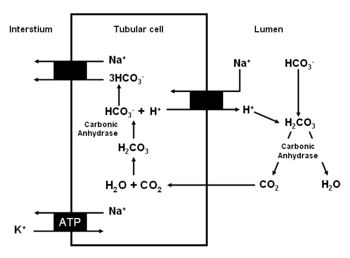 Secretion of H+ and reabsorption of HCO3+ in the Proximal Tubule

Peptide hormones and small amounts of albumin make it through the glomerular filtration barrier and these need to be reabsorbed. The reabsorption occurs via endocytosis in the proximal tubules. They are then broken down to amino acids in the epithelial cell cytoplasm and move via facilitated diffusion into the interstial fluid. The reabsorption of protein is usually complete though it is normal to detect small quantities of protein in the urine of some mammals e.g. the dog

The secretion of these compounds occurs only in the proximal tubules. These molecules are mainly bound to plasma proteins with a small amount free in an active ionised form. It is only the free ions which are able to be transported. As the ionised molecules are transported out of the blood more molecules are ionised from the plasma proteins to take their place. These new ionised molecules are then able to be excreted thus releasing more and so it goes on. This allows a large amount of the substance to be secreted at one time. The mechanisms are not very selective and so many different substances are secreted at the same time. Secretion mechanisms are responsible for the secretion of drugs, hormones and things like food additives. Many unwanted or toxic organic molecules which enter the body are unionized. They therefore cannot be secreted so it falls to the liver to alter them into ionized forms to allow them to be disposed of.

Half the plasma calcium is bound to proteins so it is only the ionised form which is available for filtration. Reabsorption of calcium occurs in the proximal tubule paracellulary however the regulation of how much is reabsorbed occurs in the ascending limb of the loop of henle, the distal tubule and collecting ducts.

Use the flash card revision resource for this section to test yourself.