Recurrent airway obstruction (RAO) is an inflammatory, obstructive respiratory disease of horses. Disease is induced by the exposure of susceptible animals to organic dust, which gives neutrophil influx to the airways, bronchospasm and mucus accumulation.[1] This causes a cough, nasal discharge, and respiratory compromise. When exposure to the allergen is eliminated, obstruction and clinical signs resolve or attenuate. However, animals are susceptible to recurrent episodes of airway obstruction throughout their lives, so management is essential. The diseases is more likely to be type III hypersensitivity reaction.[2]

Since disease requires exposure to organic dust, recurrent airway obstruction occurs in stabled horses that are bedded on straw and fed hay. The condition is therefore most prevalent in the northern hemisphere because horses tend to be stabled for large parts of their lives.[3] Summer pasture-associated obstructive pulmonary disease (SPAOPD) is a similar condition that occurs when horses kept on pasture are sensitive to environmental allergens, and may be considered the same disease as RAO but with different inciting factors.[1]

When a horse is moved from pasture to a stable, the hay it is fed and the straw it is bedded on harbour organic dusts. These dusts contain components which are capable of causing inflammation of the lungs, such as specific allergens, endotoxin, moulds and small particulate matter[1]. Although small particles and endotoxin are known to cause pulmonary inflammation, there is evidence to suggest that there is an allergic component to recurrent airway obstruction. For example, bronchoalveolar lavage fluid in RAO has been shown to have increased levels of IgE specific for various moulds[4], and the cytokine response appears to be skewed towards TH2.[5] Both of these facts are suggestive of an allergic mechanism.

On exposure to dust, neutrophils accumulate in the lung and quickly invade the lumen of the airway[1]. Airway obstruction then develops due to several mechanisms. Mucus becomes more viscous and accumulates in the lumen, and bronchospasm is initiated by the actions of inflammatory mediators on airway smooth muscle and cholinergic nerves.[6] Oedema of the airway wall also contributes to narrowing, and in horses suffering chronic disease, the wall remodels to give mucus metaplasia, smooth muscle hypertrophy and peribronchial fibrosis[1][7]

RAO usually becomes apparent in middle-aged and older horses, and persists for life[7]. There is some evidence that there may be a genetic component to the disease, as many horses do not suffer RAO when they are housed in environments that can provoke clinical disease in others[8].

A presumptive diagnosis may be made on the basis of the history and clinical examination. Bronchoalveolar lavage may also prove useful.

Mildly affected horses generally present with a history of occasional coughing and exercise intolerance. Signs become more obvious as the disease progresses. Tachypnoea is often seen, and there may be a mucopurulent nasal discharge. Severely affected animals show signs of respiratory distress at rest. These can include flared nostrils, wheezing, paroxysmal bouts of coughing and a laboured abdominal component to expiration. Chronically, marked dyspnoea increases energy expenditure and the animal may lose condition, as well as developing a "heave line" due to hypertrophy of the external abdominal oblique muscle[1][7][9]. Fever does not normally develop unless there are secondary bacterial complications.

On physical examination, thoracic auscultation typically reveals a prolonged expiratory phase of respiration and adventitious respiratory noises. Wheezes are most pronounced during expiration, and crackles are associated with the excessive mucus production[9]. However, the airways are so obstructed in some severely affected animals that there is insufficient air movement to generate audible breath sounds, and the lungs are very quiet on auscultation[1]. In mildly affected horses a rebreathing bag can be used to aid auscultation, but this should never be performed in dyspnoeic animals[1][7]. There may be an increased sensitivity of the cough reflex on tracheal compression.

Endoscopy reveals excessive mucopurulent secretions in the trachea. Thoracic radiographs may be useful in cases that are not typical in their presentation or response to treatment, as they may help rule out other differentials such as interstitial pneumonia, pulmonary fibrosis, or bacterial pneumonia[1][7][9].

Routine haematology and biochemistry are usually within normal limits, and there is little evidence to support the use of serum and intradermal allergy testing in the diagnosis of RAO[7].

Fluids obtained from bronchoalveolar lavage (BAL) or tracheal wash may be useful in the diagnosis of RAO. The presence of greater than 20% neutrophils in BAL fluid (BALF) confirms the presence of lower airway inflammation, thus and differentiates horses with RAO from those with eosinophilic pneumonitis, fungal pneumonia, or lungworm infestation. Normal horses have fewer than 10% neutrophils in BALF. Cytology of bronchoalveolar lavage fluid may also reveal Curschmann’s spirals , which represent inspissated mucus and cellular casts from obstructed small airways[1]. BAL should not be performed in markedly dyspnoeic horses, and instead should be postponed until the dyspnoea is controlled. Aspiration of tracheal mucus or a tracheal lavage can also be used to evaluate lung inflammation but is less reliable than BALF. 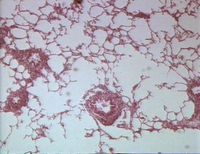 Reduction of respiratory distress after the administration of a bronchodilator confirms the presence of bronchospasm[1][7]. To test this, intravenous atropine can be administered. Horses with RAO (or SPAOD) should respond within 15 minutes[1]. The dose of atropine should not be repeated as there is a risk of intestinal stasis. 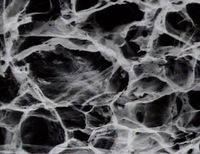 The post-mortem findings in RAO are variable. Lungs can appear grossly normal, or may be hyperinflated as a result of gas trapping[2]. They may also deflate slowly. Exudate is commonly found in the airways, and the weight of the right ventricle in comparison to the left ventricle may be increased.

The histopathology associated with recurrent airway obstruction is primarily bronchiolitis, although changes of larger airway are also seen[10]. Neutrophils accumulate in the lumen of bronchioles, which are plugged by mucus. Other inflammatory cells are also seen in the connective tissue surrounding the bronchioles. These include lymphocytes, monocytes and eosinophils. The bronchiolar epithelium undergoes mucus metaplasia, and the airway smooth muscle is seen to be thickened. Alveoli are filled with mucus overspilling from the airways.

Environmental control to reduce allergen exposure is key to the management of recurrent airway obstruction, as signs will re-appear following discontinuation of medication if this is not implemented. Since dusts in hay and straw are the most common triggers for disease, animals should be kept at pasture if possible. The availability of fresh grass eliminates the need for hay, and supplementary feeding can be achieved with pelleted feedstuffs. Round bale hay should not be provided as it is particularly allergenic and can cause environmental control to fail[9]. If turn-out is not possible, for example due to weather conditions, stalled horses should be maintained in a clean, controlled environment. Complete feeds totally eliminate the need for roughage, although some horses prefer hay cubes or hay silage which are equally acceptable. Soaked hay should not be fed as dust is incompletely removed and the nutritional content is poor. Shavings, newspaper or peat rather than straw should be used to bed animals, and supplies of hay and straw should not be kept in the same building as an RAO-afflicted animal. The addition of good ventilation to the stable design is also helpful. For example, a louvered vent may be added at the back of the stable and the top door kept permanently open. Some horses will be controlled by environmental management alone.

When medical therapy is necessary, bronchodilators and corticosteroids are used. Bronchodilators, such as clenbuterol, relieve bronchospasm and minimise respiratory distress. Since mucus accumulation and inflammatory changes in the airway wall also contribute to obstruction, complete resolution may not be seen[7]. Atropine is the best "rescue drug" in the event of severe respiratory distress. The concurrent administration of corticosteroids with bronchodilators addresses airway inflammation as well as bronchospasm. Oral, intravenous of inhaled steroids may be used. Inhaled steroids are advantageous as they are delivered directly to the site of inflammation and so lower doses are required. Fewer systemic side-effects are therefore experienced. However, in RAO the airways requiring anti-inflammatory treatment are obstructed, and inhaled steroids are only of use after lung function has been improved through the used of bronchodilators or systemic corticosteroids[7]. This prior treatment may not be necessary before the use of inhaled medication in mild cases of RAO. Generally, medical treatment should be considered a short-term measure while environmental improvements are instituted.

NSAID, antihistamines, and leukotriene-receptor antagonists have all failed to demonstrate therapeutic benefit in RAO[9].