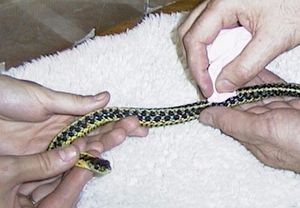 Supportive care is an important consideration in treating snakes during illness and emergencies and may be necessary as well as aetiology-specific therapy.

An important part of supportive care is the provision of adequate nutrition. This involves determination of the energy requirements and the method of administration. Protein should also be supplied at 4-5 g per 100 kcal. Once the patient is rehydrated nutritional support can be initiated. It is generally recommended that nutritional support be provided to a patient that has lost 10% bodyweight acutely or 20% chronically. Food can be in the form of whole prey or commercial nutritional preparations. Cat and dog foods are not recommended due to the high content of non-animal protein.

It is obviously worthwhile trying to coax the snake to take the prey that is offered: try gently slapping the prey against the side of the snake’s head. If this fails, nutritional support by involuntary means will be necessary. Snakes can be force-fed with either whole prey or commercial nutritional support preparations. Whole prey can be lubricated and passed nose first through a mouth pried open. The prey is then milked down the oesophagus. This may be stressful. Alternatively, blenderised whole prey or commercial preparations can fed through an orogastric tube. Both procedures can be done under light sedation.

Dehydration is common in sick snakes so it is important that fluid therapy forms part of supportive care. Rehydration is imperative prior to nutritional support or drug therapy. Methods include water baths, oral fluid (using an orogastric tube) and parenteral fluid. Water baths three times daily are a simple way of helping rehydration. All fluids should be warmed to within the snake's preferred optimum temperature zone (POTZ) prior to their use.

Fluids can be supplied to snakes by an orogastric tube (e.g. a French catheter). The mouth is opened and a mouth gag applied. Try a cleaned old radiographic film with a hole cut in the centre. The snake is held vertically. The lubricated tube can be passed through the hole of the radiographic film into the oesophagus and the snake’s mouth will not be damaged. The tube is then passed to the level of the stomach. The stomach volume is approximately 2% bodyweight so do not exceed this when administering fluids by stomach tube.

SC fluids are useful in mild to moderately dehydrated patients and those that will not allow oral access. Small volumes of fluids can be given. The best location is the lateral sinuses, which are located longitudinally between the epaxial muscles dorsally and the ribs ventrally.

Fluids should be given in the lower one-fourth of the body cranial to the cloaca (at least 3-4 ventral scales). The snake is held in dorsal recumbency with the needle directed cranially at a 45 degree angle from the abdomen off the midline (to avoid the central abdominal vein). Deep penetration should be avoided. If blood is noted on aspiration, withdraw the needle and try another site.

Severe dehydration requires fluids to be given IV. Jugulars and intracardiac catheters can be used. In an anaesthetised snake the area cranial to the heart is surgically prepared. An incision of about 5 cms (two to three scutes long) is made at the margin of the scutes and the lateral body scales on the right (the right jugular is usually larger than the left). The fascia is bluntly dissected to reveal the jugular vein, which is very superficial and runs medial and parallel to the free margin of the ribs. An appropriately sized catheter is then inserted in the direction of the heart. The catheter hub is then incorporated into the skin closure and an injection port is affixed. Antimicrobial ointment should be placed over the incision and a clean dressing placed around the snake's body. The catheter can be removed by simply removing the skin sutures and pulling it out. It is not necessary to open the incision or ligate the jugular vein. Make sure you apply pressure to the site for a few minutes!

Maintenance fluid can be given at 2.5% bodyweight/day, preferably PO but parenteral if necessary. For severe dehydration up to 40ml/kg/day can be administered. Fluid balance in snakes is poorly understood but snakes may have a lower plasma osmotic pressure than mammals. A slightly diluted mammalian rehydration fluid therefore appears appropriate. An appropriate fluid is a 50:50 combination of dextrose 5% in water and a nonlactated, isotonic multiple electrolyte solution.

Reptiles have metabolic rates of about one tenth that of mammals or birds so thermal support is essential for ill snakes. At all times maintain hospitalised snakes within their POTZ with a temperature gradient and, if critical, maintain them at the upper end of their POTZ. Snakes also need to have a hiding place and attention should be paid to humidity control. To reduce stress snakes should only be handled at feeding times. A veterinary hospital with reptiles as in-patients requires fully-functioning vivaria.

The principles of medication in snakes are similar to domestic animals. Always ensure adequate hydration prior to giving any medication.

Microscopy, culture and sensitivity are necessary to establish aetiology and the resistance/sensitivity of antibiotics prior to therapy. The use of antibiotics has changed dramatically with the availability of fluoroquinolones. These antibiotics are relatively non-toxic in the animal, are bacteriocidal and presently a low level of resistance is seen. Other antibiotics such as amikacin may be efficacious but have problems with safety. The use of chloramphenicol should be discouraged because of its use in human medicine. Dosages of antibiotics vary between taxa.

Perception of pain in reptiles may not be as obvious as in mammals. This does not mean that analgesia should be ignored. Analgesics commonly used in veterinary medicine include the nonsteroidal anti-inflammatories (carprofen) and opioid agonist-antagonists (buprenorphine and butorphanol).

The presence of parasites is often not a life-threatening situation but parasitism is part of the maladaption of wild-caught snakes in captivity. Parasites should be treated when positive faecal examinations are observed. Occult infestations occur and it is worthwhile using antiparasitics as a prophylaxis. Commonly used anthelmintics include benzimidazoles, ivermectin and praziquantel. If direct smears of faeces indicate excessive protozoal numbers (more than 10-20 on a high powered field) metronidazole can be used as an antiprotozoal.

Most drugs have not had pharmacokinetic studies done in reptiles. Their use is generally bases on experience and their use in other animals. If you think that you have found a useful treatment inform others! Publish it in the British Veterinary Zoological Society newsletter or the Bulletin of the Association of Amphibian and Reptilian Veterinarians.