From WikiVet English
Stomatitis
Jump to navigation Jump to search 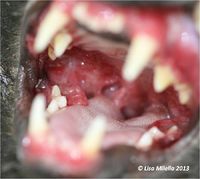 Stomatitis is the inflammation of the mucosa lining any structures within the mouth. This may include the lips, cheeks, tongue and gingiva.

Several different types of stomatitis have been described in the dog: Chronic ulcerative paradental stomatitis which is seen on the buccal mucosa that overlie the teeth, especially in the area of the maxillary canine tooth, fourth premolar and the lateral edge of the tongue. Severe ulceration can occur together with gingival recession.

Ulcerative stomatitis which presents as ulcerations on the margins of the tongue that are common together with a secondary lip-fold dermatitis due to excessive salivation.

Necrotizing stomatitis which is a very painful condition in dogs that may be caused by opportunistic invasion of normal oral flora. Suspected causative organisms include Fusobacterium and spirochaetes. Invasion of these organisms is thought to be associated with reduced host resistance.

Stomatitis in the cat:

Only one form of the disease which is Feline lymphoplasmacytic gingivitis stomatitis complex.

Both dogs and cats can develop this condition. Breeds of dog predisposed include the Greyhound, Maltese, Cavalier King Charles, Miniature Schnauzer and Labrador Retriever.

A thorough oral examination under general anaesthesia is often required to aid the diagnosis. Diagnosis is usually made by gross visualisation of the lesions. The mandibular lymph nodes may also be enlarged.

Clinical pathology may be carried out to assess renal function in the case of uraemic stomatitis. Culture and sensitivity tests may be required to aid diagnosis and enable specific treatment.

Often indicated to rule out other diseases such as pemphigus or other immunopathies.

Starts as hyperaemia and oedema of the tongue or pharynx with mucoid exudate on the surface. Lymphoid follicles on the soft palate may enlarge and proliferate. Often see white spots due to epithelial hyperplasia and increased mucous secretion, these can be scraped off to leave ordinary mucosa underneath.

Treatment is both symptomatic to control the clinical signs as well as specific to the cause of the condition. The underlying cause should be sought and treated appropriately.

Thorough teeth cleaning is necessary as well as systemic antibiotics (effective against aeobes and anaerobes). Oral rinses such as chlorhexidine may also be useful. Corticosteriods have been suggested with cases of chronic ulcerative paradental stomatitis. Diet modification in cases of renal disease to reduce blood urea levels. Tooth extraction in the most severely affected area has been suggested. Resistent lesions in cats have been shown to respond to bovine lactoferrin in some cases.

Depends on the underlying cause.