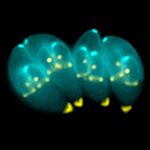 Toxoplasma gondii - Courtesy of the Laboratory of Parasitology, University of Pennsylvania School of Veterinary Medicine

Toxoplasma gondii is an obligate, intracellular coccidian parasite that is capable of infecting most mammals including man. Cats and other Felidae are the definitive host for T. gondii, and all other mammals are intermediate hosts. Toxoplasma gondii has three infectious stages:

Tachyzoites and bradyzoites are found in tissue cysts, whereas sporozoites are contained within oocysts, which are excreted in the faeces. This means that the protozoa can be transmitted by ingestion of oocyst-contaminated food or water, or by consumption of infected tissue. Transplacental infection is also possible.

The life cycle of T. gondii is complex, usually indirect and often referred to as facultatively heteroxenous. Intermediate host is not essential for completion of the life cycle. Gametogony (sexual stage) is host specific for felids.

In the naive definitive host (cats), Toxoplasma gondii undergoes an enteroepithelial life cycle. Cats become infected by ingesting intermediate hosts containing tissue cysts, which release their bradyzoites in the gastrointestinal tract when the wall is digested. Bradyzoites then penetrate the small intestinal epithelium and start sexual reproduction: produce five types of schizonts, which then give rise to merozoites. Male and female gamonts are formed from merozoites, which fertilise to form a macrogamont. A wall forms around the macrogamont to produce an oocyst, which is passed in the faeces approximately three days after ingestion of the tissue cyst. Initially, these oocysts are unsporulated and are therefore not infectious, but after 1 to 5 days sporulation occurs to produce two sporocysts, each with four infectious sporozoites. The sporulated oocyst is only 10μm. This sporulation is dependent on temperature and aeration, and sporocyts can remain viable in the environment for up to 18 months even if exposed to high or freezing temperatures and low humidity. These can then be ingested by other mammals, including sheep and humans.

Infection continues until the animal develops immunity (around 2 weeks) at which point the infection enters the chronic phase, the host's immune response has become effective. Groups of slow growing intracellular bradyzoites become walled off forming infective cysts. Bradyzoites inside cysts are protected from the host immune response whereas extracellular tachyzoites are killed. Cysts remain viable for months to years and are particularly numerous in muscle and nervous tissue. If immunity is suppressed the infection can revert to the acute form.

As cats generally develop immunity to T. gondii after the initial infection, they will only shed oocysts once in their lifetime.

When other, ‘’’non-feline, carnivores’’’ (such as dogs) or sheep consume tissue cysts or oocysts from cat faeces, Toxoplasma gondii initiates extraintestinal replication. This process is the same for all hosts, and does not vary with the form of the parasite ingested. Bradyzoites and sporozoites, from cysts and oocysts respectively, are released in the intestine and infect the intestinal epithelium where they replicate - asexual reproduction by endodyogeny (budding) producing 8-16 tachyzoites. Tachyzoites are lunate in shape, about 6 microns in diameter and possess the ability to multiply in almost any cell type. The infected cell ruptures to release tachyzoites which then disseminate via blood and lymph to infect other tissues. Tachyzoites then replicate intracellularly and, if the cell does not burst, they eventually encyst and persist for the life of the host. Tissue cysts readily form in the CNS, muscles and visceral organs. 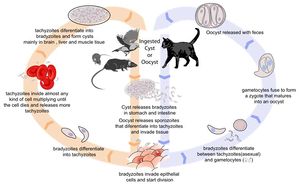 Although any of the three life stages described above can infect warm-blooded vertebrates, most infections are acquired following the ingestion of sporozoites or bradyzoites, as tachyzoites are easily inactivated in the gastric environment.

Carnivores consume bardyzoites via tissue cysts in meat, and other animals ingest sporozoites via items contaminated with cat faeces. As cats rarely practice coprophagy, infection is usually acquired through the ingestion of infected intermediate hosts such as rodents. Dogs tend to consume food or water contaminated with oocysts from cat faeces.

If a pregnant queen or human is naive to Toxoplasma gondii at the time of ingestion, transplacental infection can occur. The outcome of this depends on the stage of gestation. Infection during the first trimester usually has severe consequences, such as stillbirth or abortion; infections during the second or third trimesters are more likely to give rise to an infected foetus.