From WikiVet English
Trichinella
Jump to navigation Jump to search 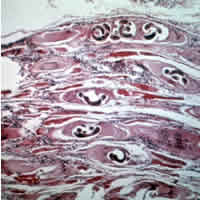 Trichinella spiralis is a helminth parasite of the Trichinelloidea superfamily. It is unique among helminths as it is intracellular and requires only one host.

Disease is most important in pigs and wild boar due to its zoonotic transmission through eating pork. Trichinellosis is a serious public health hazard.

The trichinae are widespread across all continents. T. spiralis is found in temperate Europe, Asia, New Zealand, North and South America.

The lifecycle of T. spiralis is direct. Larvae are ingested by the pig through scavenging or predation. Free range outdoor pigs are therefore at highest risk. Gastric digestion releases the larvae from the infected muscle tissue. They then undergo moults and copulate in the small intestine after which the males die and the females penetrate into the intestinal mucosa.

The females then produce more larvae which can disseminate through the host in the blood and lymphatics, localising in the striated muscles. In pigs and wild boars, preferential sites appear to be the diaphragm, masseters and tongue. The muscle cells are transformed by the larvae within them, to form nurse cells which can supply nutrition and protects the larvae in a collagen capsule. Larvae can then survive in frozen and decaying carcasses forming an important route of transmission.

Humans are infected by eating raw or undercooked meat containing the infective larvae.

Damage is caused by penetrating female larvae in the small intestine and dissemination of larvae into the muscle masses. The degree of damage is dependent upon pathogen load.

Direct microscopy of muscle samples between two glass plates can detect the organism.

Digestion with pepsin-HCl or ELISA testing is also possible.

Large burdens may cause enteritis followed by myositis, fever and myocarditis which can be fatal.

Anthelmintics can be used both as a treatment and control method for trichinellosis. Prevention of scavenging and feeding appropriate feedstuffs to pigs forms a major part in controlling the disease as well as meat inspection and destruction wherever trichinellosis is found.

Sampling of the diaphragm in the abattoir is performed routinely in most countries.