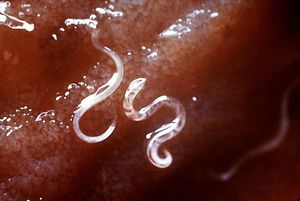 Uncinaria stenocephala is a hookworm of dogs that belong to the superfamily Ancylostomatoidea. This superfamily contains exotic hookworms that infect man and animals. Unlike the other dog hookworm, Ancylostoma caninum, U. stenocephala occurs in cool and temperate climates including that of the UK. The details of the life-cycle are given elsewhere but it should be noted that the infection is mainly acquired by ingestion of L3 larvae and, unlike A. caninum, L3 larvae are not passed to neonates by the trans-mammary route.

U. stenocephala can be recognised on examination under a microscope by its large, dorsally curved, buccal capsule which contains cutting plates at the ventral edge. A single pair of small teeth are also found within the ventral capsule. Adults bury their heads deep in the wall of the small intestine and feed on plugs of mucosa.

Like almost all hookworm eggs, those of U. stenocephala are oval in shape and around 50 um in diameter. The shell membrane is thin and transparent and, by the time the egg is passed in the faeces, it contains a segmented ovum at the 4 or 8 cell stage. In a tropical climate, the egg will hatch within 24 hours and only L1 larvae will then be detectable.

The larvae of U. stenocephala require moist conditions for development to the L3 stage and clinical disease is reported most frequently in dogs kept in wet confined conditions where larvae build up to high levels. Common situations include grass runs, wet concrete pens (especially if the surface is very pitted and able to retain moisture) and in areas contaminated by foxes which also act as definitive hosts. Certain groups of dogs are therefore particularly affected, including greyhounds in densely-populated racing kennels, fox hounds, sheepdogs and dogs in rural environments. Since eggs also require warmth for development, most infections are also seen in summer.

Since adult worms are mucosal plug feeders, anaemia is not usually a feature of infection with U. stenocephala and most infections are asymptomatic. Where clinical signs are seen, the following patterns may be expected:

Animals should be housed in conditions to prevent the build up of infective larvae and it is especially important that concrete runs are dry and well-maintained. Many of the anthelmintics licensed for use in dogs will clear hookworm infection (including praziquantel and pyrantel) and it is best to treat in the Spring when parasite burdens will be at their lowest.

Hookworms are able to cause a disease called Cutaneous Larva Migrans in humans.