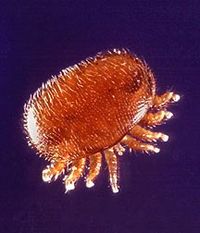 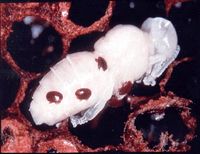 The Varroa destructor mite is an external mite of honey bees. It causes varroatosis, which is no longer a notifiable disease in the UK.

The mite is oval in shape and 1-1.5mm in length. It is reddish-brown in colour and has 8 legs.

The mite has a 10 day life cycle. Eggs are laid in the hive and develop with the brood cells into mites.

The mites are blood-sucking, feeding on the bees and leaving open wounds. This weakens adult bees and damages growing larval bees, resulting in deformities.

Varroosis is the clinical syndrome caused by the infestation of colonies of honey bees (Apis mellifera) by the mite Varroa destructor, formerly Varroa jacobsoni. Varroosis is a complex syndrome that may result in so-called Colony Collapse Syndrome, failure to survive hibernation or complete absconcion from the hive. V. destructor was traditionally a parasite of the Asian honey bee (Apis cerana) which is much more resistant to infestations but it began to infest European bees around fifty years ago and it has spread to all parts of the World except for Australia[1]. So far, only two mitochondrial haplotypes of V. destructor (Korea and Japan) have been found to have made the transition from A. cerana to A. mellifera[2]. The mite is able to infect colonies of Africanised ('killer') honey bees but these do not appear to show colony collapse syndrome[3].

The fertilised adult female mite enters a random cell[4] just before it is sealed and initially feeds on the brood food. When the bee egg is laid and the cell sealed, the mite bites through the integument of the larva (usually towards its caudal end in the second sternite of the abdomen) and begins to suck its haemolymph. The same wounds are used by all of the mites in the cell and they rapidly become infected with bacteria[5]. The wounds are generally sealed with scar tissue after the first imaginal moult[6]. She lays eggs after around 72 hours and she and her offspring continue to feed on the developing bee. In heavy infestations, several female mites may enter a single cell. The next generation of mite offspring are produced in the cell[7] and these individuals continue to inter-breed after 6-7 days of development. A female mite first produces a male offspring then 5-6 female offspring, giving the mite a high biotic potential. The sequence of sexes seems to be dependent on a signal from the developing brood as female mites that are moved to a new cell after laying the male egg start an entirely new breeding cycle, apparently caused by the younger age of the new brood[8]. When the developed bee breaks out of the cell, it carries adult female mites into the hive but immature stages and male mites are left to die. The female must therefore be fertilised before she leaves the males behind, one reason why the infestation is sometimes romantically called Amazon disease. The female mites show a predilection for the cells of drones[9], probably because these brood take longer to develop and therefore allow a further generation of mites to develop in the cell. However, unlike Varroa infestations of the Asian honey bee, it is able to develop in any type of cell. Developing larvae and pupae that suffer mite infestations often die or appear abnormal at emergence, often being smaller, weaker and having incomplete wings. Infested drones are unable to fly as far as uninfested bees and they have a lower sperm production[10] and it has been shown that worker bees that were infested with V. destructor as pupae are not able to make physiological changes needed for survival over winter[11].

Africanised honey bee colonies are resistant to infection by V. destructor, a finding that may be related to the fact that they build narrower cells[12].

The female mites preferentially attach to worker bees of the nursery group, probably due to the differential expression of alkenes on the surfaces of these and the older pollen gatherers[13] and due to the production of different pheromones by different groups of bees[14]. The mites also express cuticular hydrocarbons that mimic those of the bees they parasitise and the pattern of expression of these hydrocarbons changes according to the stage of development of the bee[15]. The mites suck haemolymph from the adult bees and also transfer numerous pathogenic viruses between individual bees. The feeding process may also make these worker bees more susceptible to the diseases caused by these viruses after they are introduced. The female mites have a variable lifespan depending on the time of year. In winter when the bees are hibernating, they may survive of up to five months but in summer, they generally live for 3-4 weeks. The mite reproductive ratio falls during winter as a greater proportion of male mites die before reaching maturity, reducing the number of female mites that become fertilised[16].

Mites are transferred between colonies by worker bees in areas of high hive density by robbing (where worker bees steal honey from other hives), drifting (where worker bees become attached to another colony) or swarming (where unfertilised queens mix with drones from several colonies to become mated). Since its first reported infestation in the UK in 1992[17], V. destructor has now spread across the whole country except for the Isles of Scilly, the Isle of Man and some Scottish islands. Mites can also be spread iatrogenically as they survive on fomites for up to 72 hours and this is thought to be the major route of transmission.

V. destructor adult mites are visible to the naked eye but they should be differentiated from several other mite species that affect honey bees (see below). They may be seen attached to worker bees or within cells from which workers have recently emerged. Live mites may drop from worker bees and be seen in the bottom of a hive.

Bees that were infested by the mite during development may be small and weak, they may have wing deformities and they may have a reduced lifespan compared to normal bees. Dead brood may be seen within cells where they died as a result of the infestation.

If the infestation is severe, so many brood are affected that dying workers are not replaced at the normal rate, reducing the size of the colony. As the worker population shrinks, the normal functions of the hive cannot be maintained and the colony disintegrates, a phenomenon described as colony collapse syndrome. In such heavy infestations, mites should be evident on worker bees and multiple female mites may enter each worker or drone cell. As workers fail to emerge, a speckled pattern begins to form on the comb as some cells are empty and others remain capped. Other workers usually remove these dead brood but these tasks are not completed in collapsing colonies. In an unsupervised hive, an infested colony can collapse within weeks and the dispersal of its remaining bees can spread the mite in the local area.

Infested colonies are less able to make preparations for hibernation, including storage of honey. These colonies may therefore not survive the winter and empty hives may be found on inspection in the spring.

Estimation of the Infestation

An infestation of 1,000 mites is considered to be the maximum tolerable level in colonies in the UK before the colony is in real danger of collapse. Ideally, each hive should be checked four times in the season to estimate the level of the infestation using one of the following methods:

Several other mites infest honey bees or may be found within a hive and V. destructor must be differentiated from these.

Hang accaricaidal strips between combs in the hive, after autumn 'honey flow'. If the outbreak is isolated, destroy all colonies involved in this outbreak to try and prevent further spread. However, if the outbreak is widespread, monitor mite numbers and treat with acaracide.