From WikiVet English
Adenocarcinoma
Jump to navigation Jump to search 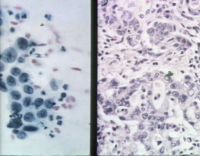 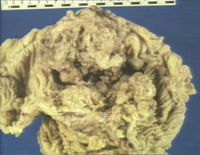 Adenocarcinoma is the most common gastric neoplasm in small animals. It is a tumour of the mucosal epithelium. These are generally found in the fundus (particularly along the lesser curvature), and in the pylorus. There are two main internal appearances of gastric adenocarcinoma, both of which show thickened, oedematous, pale and firm tissue:

The external appearance of an affected stomach can include thickening of the draining lymphoid vessels due to tumour infiltration ('cording of the lymphatics') and evidence of a scirrhous reaction to the carcinoma. Adenocarcinomas are locally aggressive and spread via the lymphatics to the lymph nodes, lung, liver and adrenal glands.

These tumours are far less commonly diagnosed than perianal adenomas. Large breed male dogs are overrepresented, but they do also occur in spayed female dogs.

A hormonal dependence has not been shown.

Tumours are usually single, ulcerated and invasive. They tend to grow rapidly, and to a larger size than the benign version.

30% of adenocarcinomas metastasize to the sublumbar lymph nodes, liver and lungs.

Cytology will reveal large hepatoid cells with a large nucleus, prominent nucleoli and a large cytoplasm. It will not distinguish between adenomas and adenocarcinomas.

Further investigation should be carried out if malignancy is suspected, including: thoracic and abdominal radiography, abdominal ultrasound, and cytology or biopsy of enlarged lymph nodes.

Adenocarcinomas do not regress following castration. Small tumours can be treated by wide surgical excision, with or without cryosurgery.

For large masses, surgical debulking followed by radiotherapy may be useful.

Dogs with metastasis have a poor prognosis, but may be treated by surgical excision and intravenous doxorubicin for a slightly prolonged survival time.

The masses may cause local problems and metastasise. They often secrete a parahormone-like substance to cause paraneoplastic syndrome. This can arise even when the primary tumour is very small resulting in bone resorption and hypercalcaemia, which in turn can cause renal failure.

Adenocarcinoma of the nasal cavity is most common in dogs but also sheep. Glandular acini in layer of cuboidal or columnar epithelium are present with often mucin filled acini.