From WikiVet English
Adenoma
Jump to navigation Jump to search

An adenoma is a benign epithelial tumour arising in the epithelium of the mucosa (stomach and intestines), glands (endocrine and exocrine) and ducts.

Adenomas observed in veterinary species include: 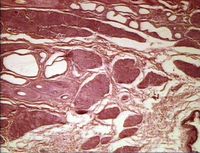 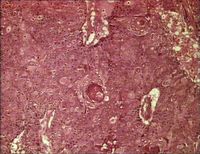 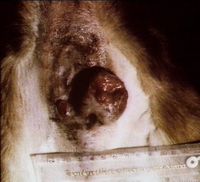 These tumours, also called hepatoid gland tumours, arise from the solid, modified sebaceous circumanal glands. They are the third most common tumour in intact male dogs, and arise more frequently in older dogs.

The tumour is under hormonal control. Hepatoid glands are also found at the tail head, prepuce and other skin sites, and tumours can also arise from there.

Adenomas occur alone or in number, as round, well-differentiated, freely-movable masses. Tumours can become ulcerated and secondarily infected. There can be signs of perianal pain and tenesmus.

Cytology of the mass will reveal large hepatoid cells with a round, central nuclei, multiple nucleoli, and an abundant cytoplasm. There may be concurrent inflammation or haemorrhage. Cytology cannot distinguish adenomas from adenocarcinomas, and further investigations should be carried out if malignancy is suspected.

Castration is the treatment of choice and 95% of tumours will regress. Administration of oestrogens or anti-androgens can also be considered, but side-effects of those hormones should not be forgotten. Surgical removal of the tumour may be necessary if it is large, or in females.

This is a tumour of the apocrine sweat gland and is rare in dogs and cats. It can be difficult to differentiate from an adenocarcinoma, and immunohistochemistry has been used for this purpose.

Adenomas rarely ulcerate, are associated with little local inflammation and have a cystic feel on palpation.

They occur most commonly in older dogs and cats, and are usually restricted to the head.

This occurs with some frequency in dogs and cats, and is thought to be linked to the presence of long-standing otitis externa, leading to increased glandular dysplasia.

These tumours usually occur in older animals, and conservative local resection is usually sufficient to manage them.

These are common in older dogs and cats and are usually distinctly wart-like or cauliflower-like in appearance.

The prognosis is good with surgical resection.

This tumour is rare in animals, and the malignant adenocarcinoma is much more common.

This is a benign tumour which is quite common in cats and dogs.

Depending on the type of the insertion base, the adenoma may be pedunculated with a long stalk, or sessile with a broad base. This influences the method of resection and the rate of recurrence, as pedunculated tumours are much more easily removed.

It is seen mostly in sheep and cattle and usually presents as a single, pale, soft, often large nodule, which is well demarcated from adjacent tissue, often with a noticeable capsule. The tissue has a normal hepatocytic appearance. No portal tracts can be seen within the mass and a capsule surrounds the growth.

Also called biliary adenoma, it is very rare but has been reported in dogs and cats. It shows an expansive growth and consists of slightly dilated, occasionally cystic structures, lined with cuboidal or flattened, well differentiated biliary epithelium.

Image of multifocal pancreatic adenoma in a dog from Cornell Veterinary Medicine Adenoma of the exocrine (zymogen) cells of the pancreas is known in several species and is recognised by its ductal or acinar pattern of cells, with an expanding growth pattern and complete encapsulation. Cystic spaces may be created by the tumour cells, which may also project in a papillary pattern into the lumen of the cysts.