The hindgut of the avian digestive system terminates in the cloaca. The external opening through which faecal matter and uric acid is excreted is called the vent. The shape of the vent varies depending on species. 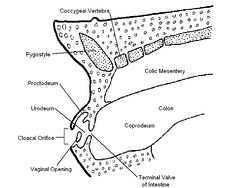 The colon, ureters and deferent ducts/left oviduct enter at various levels. It can be divided into the coprodeum, urodeum and proctodeum by complete annular folds. Some urinary excretions arriving in the cloaca become incorporated with the ingesta and move in a retrograde fashion to the caeca, increasing the absorption of water and electrolytes from the urinary waste.

The coprodeum is the most cranial division of the cloaca. It is the continuation of the colon where faeces are stored. It is bounded by the coprourodeal fold. It can be stretched by the faecal pressure so the central opening is everted through the vent.

The urodeum is the middle part of the cloaca. It is caudal to the proctodeum fold. It has the ureteric opening in the dorsolateral wall above the papilla of the deferent duct/oviduct opening. 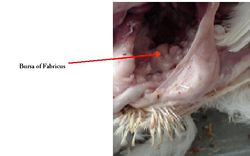 The proctodeum is the caudal segment. It is short and ends at the vent. The opening in the dorsal wall leads to the cloacal bursa of Fabricus.

The vent is a horizontal slit. It has the phallus of males on the internal surface of the ventral lip. During insemination, the vent is inverted.

The avian vent and cloaca consist of columnar epithelium. Stratified squamous epithelium are present at the external opening of the vent and in the caudal proctodeum. There are broad folds of mucous membrane forming crypts, which branch near their base. Lymphoid tissue is present in the submucosa. The fold of mucous membrane covering the entrance to the bursa is composed of columnar epithelium, muscle, connective tissue and goblet cells. There are two layers of tunica muscularis; inner circular and outer longitudinal.

Galliformes (turkeys and chickens) can move urates from the urinary tract into the colon and caeca where ammonia is released for protein synthesis. A small membrane covers the opening of the oviduct into the cloaca in ducks, geese and swans until sexual maturity.

Click here for information on the Bursa of Fabricus