In the first 5 months after hatching, the ovary gradually develops from a small irregular structure with a finely granular surface into one where individual follicles can be observed. 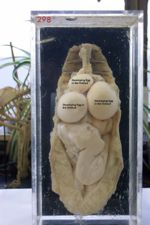 The oviduct may be divided into the infundibulum, magnum, isthmus, uterus and vagina. The oviduct not only conducts the fertilized ovum to the Cloaca, but adds substantial amounts of nutrients. It also encloses the ovum within membranes and a shell, providing protection for the embryo. It conveys spermatozoa to the ovum for immediate fertilization and stores them for future use. One insemination is sufficient to fertilize the ova released during the following 10 days.