The gizzard is also referred to as the muscular stomach or ventriculus. It is connected by the isthmus to the proventriculus and to the duodenum. 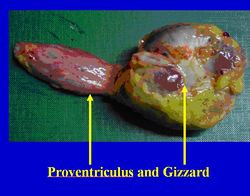 The gizzard allows mechanical reduction of tougher material through powerful muscular development. It is cranial to the liver and spleen. It contacts the sternum and lower left abdominal wall as well as the liver. Dorsally the abdominal air sacs separate it from the intestines and gonads. The duodenum and pancreas lie at its caudal right surface. It is more caudal than the proventriculus and is roughly on the midline of the bird. It is lens shaped and the interior is elongated by the cranial and caudal blind sacs. The cranial blind sac contacts the proventriculus. The pylorus is on right surface next to the cranial blind sac. 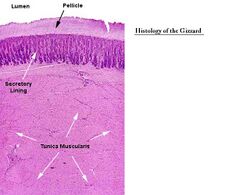 The gizzard has a thin, but tough mucous membrane. It has a pale, thin lining raised into ridges with three layers of lamina muscularis. The gizzard also has cuboidal epithelium and some tubular glands present. There is a thick keratin layer to protect the muscle.

The cuticle of koilin is a carbohydrate complex, present due to the solidifying of the glandular secretion. It is replenished as it is worn down.

Grit should be provided in a seed eating birds diet. It is radiodense and marks out where the gizzard is located on radiographs.