The intestines occupy the caudal part of the body. They contact the reproductive organs and the gizzard. The small intestine is long and relatively uniform in shape and size. There is no demarcation between the jejunum and the ileum. 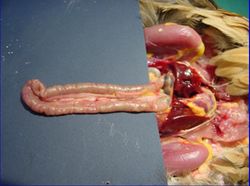 Anatomy of the Avian Duodenum and Pancreas - RVC 2008

The duodenum passes caudally over the gizzard then loops back towards the stomach where it joins the jejunum. It arises from the right dorsal aspect of the gizzard. The loop lies ventral on the abdominal floor and the pancreas lies within the loops. Three pancreatic ducts and one bile duct enter the caudal duodenum at a common papilla.

The jejunum has loose coils around the mesentery. It has thin walls so its content appears green. It is suspended from the dorsal wall of the abdomen by the mesentery.

The ileum begins opposite the apices of the caeca or at the vitelline diverticula. It is suspended from the dorsal wall of the abdomen by the mesentery . 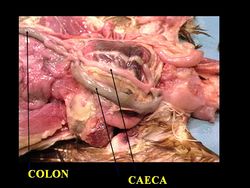 Anatomy of the Avian Colon and Caeca - RVC 2008

The short colon lies ventral to the synsacrum and opens into the cloaca. It runs ventral to the vertebrae and terminates in the coprodeum. Amino acids and glucose can be absorbed here.

Two caeca from the ileocaecal junction run with the ileum caudally. They are blind sacs. They extend towards the liver then fold back on themselves. The mesentery runs between the caeca then on towards the ileum. It often contains dark coloured material. There are three parts of each caecum. It is where the bacterial breakdown of cellulose occurs. Antiperistaltic movements transport chyme and the caeca are emptied a few times per day. Unlike mammals, there are no lacteals in the epithelium. 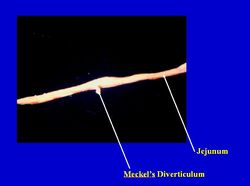 The vitelline diverticulum is a small outgrowth on the jejunum. It is the former connection with the yolk sac. It is also called Meckel's diverticulum.

Patches of lymphoid nodules are present in Peyer's Patches. They are most abundant in the duodenum. There are no mesenteric lymph nodes.

The serous coat has nerve plexuses. There are columnar epithelium and goblet cells, with smooth muscle in folds at the base. The caecal sphincter at the proximal part contains a lot of lymphoid tissue (caecal tonsil). The middle section has thin walls and appears green and the bulbous blind ends have thicker walls.

The duck and goose have several loops of 'U' shaped jejunum. Pigeons have a circular mass of jejunum with inner and outer turns. Long caeca are present in the turkey and chicken. Pigeons and song birds have short caeca. Parrots do not have caeca. The dorsal and ventral lobes of the pancreas are connected dorsally in poultry.

Click here for information on the Small Intestine - Anatomy & Physiology